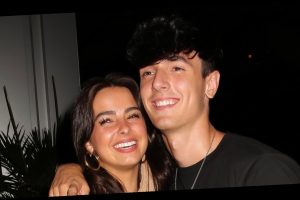 Bryce Hall and Addison Rae are all smiles while leaving a dinner at BOA Steakhouse on Thursday night (July 9) in West Hollywood, Calif.

The friends and TikTok stars were joined by her family for the night out.

That night, Addison shared a new TikTok video where they recreated her first video, set to Kelsea Ballerini‘s “Kiss Me Like You Mean It”.

In the video, Addison lip-syncs part of the song and gestures for someone to come over. Bryce then appears and gives her a kiss on the cheek.

After dinner, Bryce also shot down the recent pregnancy rumors surrounding the two.

Earlier that day, Addison was seen out shopping in Beverly Hills while wearing a Fleetwood Mac shirt. While out, she dished on her recent week-long social media break.

“I was just taking a break just for a little bit,” she told Celebrity Livin. “On social media sometimes a lot of things can get to your head. It’s important to have a mental break.”

##duet with @addisonre yesterday was one year since my first post on tiktok!!!! WHAT!!! 😭😭❤️❤️