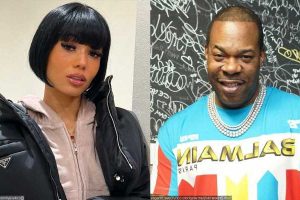 The femcee and the 50-year-old rap star send love to each other after they had a party together, jamming on a TikTok mashup by NYC producer that features the former’s ‘Players’ and the rapper’s 1997 hit ‘Put Your Hands Where My Eyes Could See’.

AceShowbiz –Busta Rhymes has welcomed Coi Leray‘s online love with open arms. After the daughter of Benzino praised him by calling him a “legend,” the “I Know What You Want” rapper returned the love back by declaring he’s so “proud” of her.

Coi first gushed over the 50-year-old emcee by sharing on Instagram a video of the two jamming on a TikTok mashup by NYC producer DJ Saige. It featured her new single “Players” and the rapper’s 1997 hit “Put Your Hands Where My Eyes Could See”.

In the caption, the 25-year-old raved, “Igh listen.. look how God works .. like literally y’all are witnessing it right now… do you know how major this is ? @bustarhymes to meet you at a time like this (unplanned) is crazy !” She added, “You are truly an icon LEGEND [fire emojis] we not finished yet @djsaige look how the universe works. I love you @djfirstchoice.”

The post did not go unnoticed by Busta, who replied in the comment section, “Legendary Vibes Queen. Reciprocal Love to the Max!!” He then exclaimed. “Super proud of you. Now let’s show ’em better than we can tell ’em.”

That aside, Coi just dropped a new R&B single called “Wasted” on December 23. On the tune, which was co-produced by Taylor Hill and Tommy “Tbhits” Brown, she laments about wasting her time and energy for a man who doesn’t even deserve them.

“I gave you one chance, then you f**ked it up, then you f**ked it up again/ A mistake ain’t a mistake when you make the same one again,” she sings. “You told me that I’m the one, but I ain’t one of them/ Communication gettin’ frustrated, can we make it make sense?/ You make more time for your homies, you hit me when you feelin’ lonely.”

“Wasted” is the latest single from Coi after she dropped her debut album “Trendsetters” in April this year. Her most recent songs include “Involved”, “Fly S**t” and “Players”.