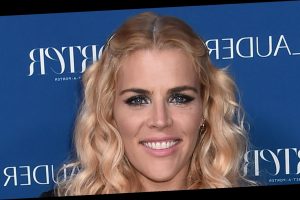 Busy Philipps is Doing Her Best, and it’s not just the name of her podcast. It also refers to her parenting and the work she’s doing to honor her child’s pronouns.

Per Insider, Philipps’ oldest kid, Birdie, came out to her as gay at 10 years old and has recently begun using the gender neutral pronouns they/them. As Philipps stated in her podcast, she fully supports her kid being in charge of their own narrative, and she opened up about how she’s handling the adjustment. “You know, Bird, I’ve been doing a bad job with the pronouns. Because Birdie said that they would like their pronouns to be they/them… I f*** up sometimes, but I’m trying my best at that, too.”

One look at Busy’s Instagram is enough to see her unwavering support for Birdie as she posts about their antics, crushes, and sugar cravings. On December 23rd she posted “OH MY GOD I get to know this person and THAT is the magic of being a parent” on an image of Birdie wearing an early Christmas present of a robins egg blue suit. In a later post, a follower who self identified as “the fellow parent of a non-binary kid who also uses they/them pronouns” commented “I’m sending you so much love and solidarity. We’re lucky people to be raising humans like these” and reveled in the support found on the feed and in the comments section.

What to do when you mess up someone's pronouns

While some kids might balk at their mothers sharing their personal lives, Birdie gave their mother the go-ahead to share their identify. “I have this public persona, and I want Birdie to be in control of their own narrative, and not have to answer to anybody outside of our friends and family if they don’t want to,” Busy explained.

Philipps’ commitment to honoring her child’s identity and pronouns is directly in line with expert recommendations for parents of trans and non-binary kids. As The Washington Post notes, it can feel complicated at first to shift one’s perception, but it’s a worthwhile investment, not just because it shows respect and teaches the child bodily autonomy, but it also contributes to better mental health outcomes for children and adolescents. Of course mistakes happen. It can be tough to learn someone’s new name or pronouns if you’re used to thinking of them as someone else, but the important thing is to apologize when you slip up, and keep making an effort to get it right.