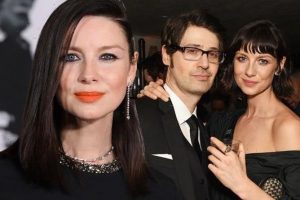 Caitriona Balfe’s new film Belfast has just been released in the USA and is set for release soon in the UK. While promoting the highly-anticipated film, new-mum Caitriona has shared some insight into life with her husband.

However, the star has on occasion shared some rare insights into her family.

The star recently opened up about living with her husband and how they don’t have one home.

She wrote: “Today, my husband, Tony, and I and our son are slightly nomadic.

“We split our time between Glasgow and London.

“When I’m working on Outlander, we’re in Glasgow.”

Caitriona did go on to share her love for Scotland in her interview with The Wall Street Journal.

“There’s something beautiful about historic buildings,” she added.

“At home in Scotland, I often find myself wondering about the lives of people who lived there before us.”

The actress is married to music producer Tony McGill.

The pair shared the exciting news back in August that they’d had a baby.

Caitriona shared the news on Instagram as she apologised to fans for taking a break from the platform.

She posted a picture of her holding her baby boy’s hand.

Alongside this, she penned: “I’ve been off socials for a while as I was taking some time to enjoy cooking up this little human ….

“We are so grateful for this little soul ….that he chose us as his parents.

“I’m in awe of him already and can’t help stare and wonder at all the possibilities of who he will become, where he will go and what he’ll do on the big adventure of his life.

“Right now he seems so small and fragile and I constantly think how grateful I am that I live in a place, in a time where he is born into peace and safety and yet at the same time I see so many in the world right now that aren’t afforded that same privilege and opportunity …”

The actress also called on her fans to support children who are not so lucky through a number of charities.

Caitriona is one of the stars of Kenneth Branagh’s new film Belfast.

She appears in the film alongside Judi Dench and Jamie Dornan.

The film is already released in the US but UK viewers will sadly have to wait until January to see it.

The release date in cinemas is set for January 21 next year.