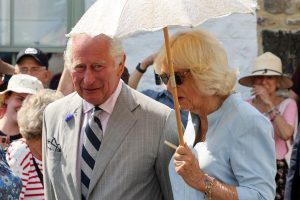 Camilla was spotted using a cream-coloured parasol today, Monday 18 July, as her and husband, Prince Charles, fought against scorching temperatures to visit Cornwall.

Today is the first day of an annual visit to the area in their roles as the Duke and Duchess of Cornwall, with the pair stopping off at Mousehole in Penzance for their first engagement of the week.

Throughout the day, Camilla could be seen clutching onto her parasol as she walked around the area, also opting for a weather appropriate pair of sunglasses, a light blue dress, and a pair of nude heels.

Prince Charles also decided on a pair of sunglasses, but decided against shielding himself from the intense sunshine with a parasol – choosing to go hands-free instead.

Unfazed by the heat, The Prince of Wales donned a light-coloured suit with a striped tie.

Royal fans and locals appreciated the royal couple's decision to take on the hottest day of the year – with temperatures rising up to 30 degrees in the Penzance area – as they lined the streets to catch a glimpse of them.

The Prince of Wales and Camilla travelled to the fishing village to visit the Solomon Brown Hall, which Charles helped fund the creation of. It is named after the vessel list with its crew in the Penlee Lifeboat Disaster 41 years ago.

At the hall, they met the members of the Mousehole Archive Group and Cornwall Hugs Grenfell, before visiting nearby Newlyn Harbour and the fishing port. It was there where they met local fishermen to talk about sustainable fishing. As well as this, they also took the time out to visit the fish market and a local fish restaurant, called Argoe, eager to try the local cuisine.

Noticing the Duchess' use of a parasol, some took to social media to appreciate her efforts to see the public while keeping herself cool.

One Twitter user praised the choice, writing: "Good for her. The parasol keeps the sun off & allows people to see her clearly still."

Another tweeted: "I think it’s a good idea to have an umbrella, it’s too hot."

And a third wrote: "Camilla with her parasol. Classic. I hope she's okay with the heat."

It's not been long since the pair had made the trip to Cornwall, with the Duke and Duchess visiting the country back in June as Charles celebrated 70 years in the role.

He and Camilla toured the Royal Cornwall Show as part of the celebration, talking to dozens of local businesses and even attended the dog show.