Home » Celebrities » Can Any Of Donald Trump’s Pardons Be Overturned? 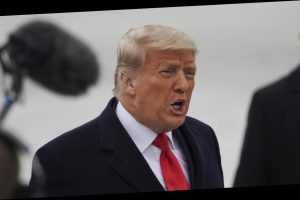 As Donald Trump’s presidency came to an end on Jan. 20, 2020, there was much speculation about who he would pardon. Many have wondered if Trump would pardon his family or possibly even himself — neither of which ended up happening. There were, however, some controversial names in Trump’s pardon list. Trump’s former chief strategist, Steve Bannon, received a full pardon, per Associated Press. Bannon was facing fraud charges in relation to a fundraising campaign. According to CNN, Trump and his team went back and forth with their decision to include Bannon in his list of pardons, ultimately opting to do so just hours before leaving the White House. Trump also pardoned rapper Lil Wayne, who has expressed consistent support for the former president.

With more than 140 pardons handed out on the final day of his presidency, many are wondering the same question: can Trump’s pardons be overturned or reversed?

After seeing former President Donald Trump’s full list of pardons, many people are wondering whether they can be reversed or overturned by his successor, President Joe Biden. When it comes to presidential pardons, they typically cannot be overturned, according to USA Today. As long as a pardon is delivered and accepted by the recipient, there’s little that Congress or courts can do.

Newsweek sat down with Brian C. Kalt, a law professor at Michigan State University, and got more details about pardons and how unlikely it is to overturn them. “You can’t overturn a valid pardon,” Kalt told the outlet. “The only recourse would be to establish that it wasn’t a valid pardon in the first place.” Many are speculating that the reason Trump didn’t pardon himself is that it would have been considered invalid, therefore rendering it a useless move. When it comes to the pardons Trump gave to other people, though, it seems that they will likely stand.

Sometimes, however, a president can rescind their pardon, but that’s extremely rare. In 2008, George W. Bush pardoned Issac Robert Toussie, only to rescind it a day later. According to The New York Times, Bush and his administration were worried about Toussie’s father’s monetary contributions to the Republican National Committee. While Bush was able to rescind his own pardon, it’s not common. As for Trump’s pardons, it’s safe to say that they will likely not be overturned by Biden’s administration.