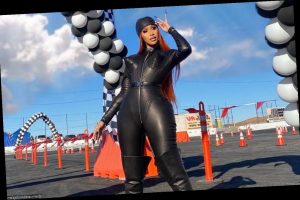 The ‘WAP’ hitmaker issues an apology after she’s accused of cultural appropriation for her portrayal of goddess Durga in the cover of Footwear News to promote her Reebok collaboration.

AceShowbiz –Cardi B is forced to apologize after her photo for Footwear News landed her in hot water. The rapper has been accused of cultural appropriation for channeling Hindu goddess Durga in the cover of the magazine’s November issue to promote her Reebok collaboration.

Learning of the controversy caused by the photo, the Bronx femcee took to her Instagram Stories to express her regret for offending the Hindu community. “When I did the Reebok shoot, the creatives were telling me, ‘You gonna represent a goddess, that she represents strength, femininity and liberation.’ And that’s something that I love and I’m all about,” she explained why she agreed with the theme of the photo shoot.

She went on saying, “And I thought that it was dope, but if people think I’m offending their culture or their religion I want to say I’m sorry.” Claiming that she meant no disrespect with her portrayal of the Hindu goddess, she added, “I do not like disrespecting nobody’s religion. I wouldn’t like people to offend my religion.”

“I wasn’t trying to be disrespectful,” she continued, before admitting her guilt for not doing enough research beforehand as promising, “I can’t change the past, but I’m going to do more research for the future.”

Footwear News has also responded to the criticism by removing the photo in question and releasing a new cover featuring Cardi in all-black ensemble. “Yesterday we posted content from our exclusive Cardi B cover shoot. One of the images was intended to pay homage to Hindu goddess Durga, and our intent was to show a powerful woman,” the magazine said in a statement.

It added, “However, we realize we were not considerate of certain cultural and religious perspectives and how this could be perceived as deeply offensive… We take full accountability for this oversight and we apologize.”

The controversial picture featured the “WAP” hitmaker channeling goddess Durga as she sported ten hands in different positions while holding a red shoe from her new sneaker collection. Instead of being praised for paying homage to the goddess of war, she was called out for the photo.

“So some people are saying Cardi B is paying homeage to our hindu goddess Durga. As a hindu, I want to say that, durga maa is never depicted bare bodied,” one laid out her issues with the photo. “Secondly it is prohibited to wear shoes in a temple and this woman is holding a shoe on her hand depicting goddess Durga?”

Another added, “Shoe a f**king shoe do you know who durga maa is? This is disrespectful!!! Cardi it’s a No. Never. Not. From us.” A third one similarly commented, “cardi this is disrespectful, you don’t hold shoes and pay ‘homage’ to Durga Maa like that, shoes aren’t allowed in temples.”