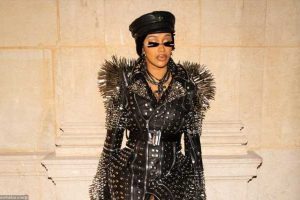 One Twitter user seemingly tries to put the raptress on a bad light by posting a cropped video of her talking about non-binary people in a new episode of her Facebook Watch series, ‘Cardi Tries __’.

AceShowbiz –Cardi B faced backlash over her remarks in a new episode of her Facebook Watch series, “Cardi Tries __”. In the episode, the “WAP” raptress helped marry a same-sex couple with Raven Symone‘s assistance. However, one Twitter user seemingly tried to put Cardi on a bad light by posting a cropped video of her talking about non-binary people.

In the clip from the episode, the mother of two said, “I need to know what you went through that you feel like you’re non-binary.” The award-winning star added, “Sometimes I just feel like people shouldn’t take words and take it as a trendy thing to do, I appreciate when people have a story….”

In the caption, the user wrote, “How do y’all feel about a cis person saying this?”

After the post went viral, Cardi’s fans quickly jumped onto her defense. “Post the WHOLE clip you weird b***h! She literally said not everyone has to explain themselves bc every LGBT person has their own journey. Like you b***hes are DUMB,” one fan wrote back. “Funny you cut it off right when she said people don’t have to share their experience or their life,” another fan added.

“You really thought we were gonna let you crop that video and completely distort what she actually said and meant? Heney! This is not Facebook!!” someone else pointed out.

She also retweeted several messages that echoed the sentimnent, One read, “the main reason why people get away with misleading stories on this app is because they know a lot of y’all are gullible [enough] to believe it. Y’all won’t do the research for yourself. They think your a** is dumb, or they have an agenda on the person they’re attacking.”