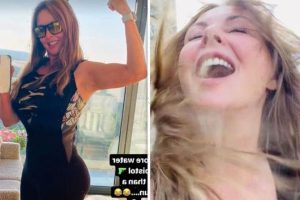 Carol Vorderman says she 'lives in a wardrobe malfunction'

Carol Vorderman, who rose to prominence on Countdown, has been keeping her loyal following entertained with her various activities while in Wales. The BBC Radio Wales host has recently taken up a new hobby, as she urged fans to not “show the kids”.

It comes after the presenter shared a photo that many fans likened to Meg Ryan’s infamous scene in the film, When Harry Met Sally.

Taking to the water, Carol could be seen on top of a paddleboard while sporting a wetsuit.

The 60-year-old waved at the camera before sharing a trick about staying afloat.

The figure-hugging outfit clung to her frame as the mathematician’s pert bottom was on full display.

The two-time Rear of the Year champion flaunted her toned physique while enjoying the warm weather.

Carol’s highlighted tresses hung loosely over her shoulders as she completed her look with a lifejacket.

In view of her 139,000 followers, the former Countdown host penned: “I still fall in sometimes but someone told me a GREAT TRICK for paddleboarding beginners…..it’s this…

“DON’T LOOK DOWN AT YOUR BOARD… Omg look at the horizon and your legs kinda deal with the bumps and swells….

“Honestly made the biggest difference for me.”

In a previous post, Carol warned parents to not show their kids her latest snap after she admitted to an error surrounding her make-up.

The age-defying beauty released the air from her paddleboard and began to take photos showcasing her windswept hair.

In a short video, Carol explained it was like a “wind machine” as her hair began to blow around her face.

A series of photos also showed her windswept hair hanging by her face as Carol’s mouth was open, which caused a stir amongst fans.

She wrote: “Lols…..I love doing this when you release the air from your paddleboard. It’s like a Billy Big Bo*****s wind machine on a photoshoot.

“Ah…I forgot the make up bit…Soz…don’t show it to the kids or they’ll get nightmares.”(sic)

The comment section was swiftly inundated, as fans questioned the snap.

One quipped: “Wow, picture three could easily be mistaken for another moment!”

A second joked: “Are you sure it’s the paddleboard?”

A third added: “Looks like a scene from ‘When Harry met Sally’ and we all know which scene I’m referring too.”(sic)

Another wrote: “This does not look like a paddleboarding scene!” while a fifth added: “Reminds me of a cafe scene in a film.”

The actress is remembered for faking an orgasm during the film.