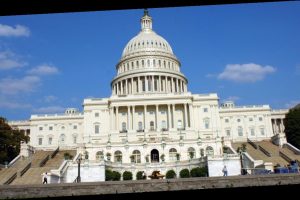 Pro Donald Trump protestors have breached the United States Capitol building and there are now reports of tear gas and shots fired in the building. So far, there is only reports of what is happening indoors and we’re praying for the safety of all inside.

Reports indicate that there could be 100 people still inside the building. The U.S. Capitol locked down with lawmakers inside as violent fights broke out between supporters of President Donald Trump and police. The protesters tore down the metal barricades at the Capitol’s steps, and officers have since been seen firing pepper spray into the crowd.

The National Guard is being deployed to the location to ensure the safety of everyone inside and to remove protestors.

Celebrities have been tweeting about what is happening, with many calling out Republicans for not condemning violence, and instead, instigating distrust and unrest.