Home » Celebrities » Celebrity Couples Who Celebrate Both Christmas and Hanukkah

Celebrity Couples Who Celebrate Both Christmas and Hanukkah 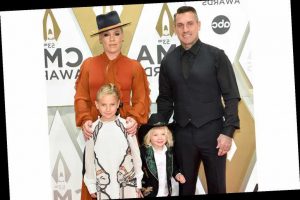 The singer and former pro motorcycle racer, who wed in 2006, have raised their daughter Willow and son Jameson to celebrate traditions of both Pink’s Jewish background and Hart’s Christian one. On Instagram, Pink has shared snaps of the family’s Christmas tree as well as their menorah over the years. The former That ’70s Show costars and real-life couple celebrate both holidays, but are opting out of presents on Christmas for the time being, Kunis revealed to Entertainment Tonight in 2017.

“So far, our tradition is no presents for the kids,” the actress said. “We’re instituting it this year because when the kids are [younger than] 1, it doesn’t really matter.”

She shared that while she was raised Jewish and Kutcher Christian, she began celebrating Christmas when she moved to America. “Coming to America is when you realize Christmas has a magical quality to it. In Russia, back in the day, it was a very religious holiday, so you don’t celebrate Christmas if you’re not Christian and if you’re not at Mass. So I, being Jewish, was like, ‘Christmas is not for you,’ ” the Bad Moms star shared.

After moving here, her family felt like the holiday was more inclusive, and they “literally bought a Christmas tree,” she revealed, adding, “So as far as tradition goes, my family’s big on any excuse to get the family together and get drunk.” Just like his and Catherine O’Hara’s characters’ interfaith celebration on Schitt’s Creek, Levy (who is Jewish) and his wife (who is Christian) also celebrate both holidays in real life. His son and costar, Dan, joked about the duality on Twitter in 2012, writing, “One half of me is celebrating Hanukkah, the other half is decorating a tree. My body is confused. #halfie #chrismukkah.” Since tying the knot and welcoming son Moses in 2019, Hall and Greener have “tried to combine our lives,” the TV host told PEOPLE.

“He’s Jewish, so we had a bris here at the house,” Hall said of the Jewish ceremony of circumcision for their son.

“My mom nearly passed out. We had both grandparents on each side there, and he’s going to Texas to have a Christening or a Confirmation at my mom’s Southern Baptist church,” she continued of raising their little one to embrace tradition from both his parents’ heritages. “We’ve just combined our life experience, and we want to teach him tradition.” The author and advocate, who was raised Methodist, wed Mezvinsky, who is Jewish, in 2010. While Clinton didn’t convert, she has documented the pair celebrating Hanukkah with their kids Charlotte, Jasper and Aidan over the years. “Getting ready to light our menorah and sending peace and light (and health) from our family to yours,” she captioned a photo of their menorah on Twitter this year. Goodwin, who was raised Jewish, reconnected with her faith in 2013, but the Once Upon a Time costars still celebrate the Christmas season with their sons Oliver and Hugo.

END_OF_DOCUMENT_TOKEN_TO_BE_REPLACED

END_OF_DOCUMENT_TOKEN_TO_BE_REPLACED
We and our partners use cookies on this site to improve our service, perform analytics, personalize advertising, measure advertising performance, and remember website preferences.Ok