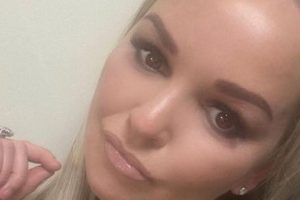 Celebrity SAS star Jennifer Ellison has shared the terrifying moment her house was shot at by a man wielding an AK-47.

The former Brookside actress, 39, recalled her ordeal on the popular show as she was confined with the instructors about some of the traumatic events that have happened in her life.

She first spoke about a “volatile” relationship she was in with someone she felt was “connected” to a “gangland world”.

The star continued: "I was doing Phantom of the Opera at the time and I heard on the news that my house had been shot with an AK-47. I went back to work with the cast and Andrew Lloyd-Webber said they didn’t want me in the production anymore because they didn’t feel safe."

Jennifer explained that she felt "humiliated" and "worthless".

The actress is starring in Celeb SAS along other stars including Maisie Smith, Fern McCann and Pete Wicks. The Channel Four show's aimed at testing the physical and mental capabilities of celebrity contestants in extreme ways.

This comes after Jennifer recently showed off her jaw-dropping figure following her three-stone weight loss.

She was spotted at Celebrity SAS: Who Dares Wins launch party on Sunday sporting a black co-ord boasting a cropped blazer which showed off her toned abs and flared trousers. She completed the look with sleek shoulder-length hair and a YSL handbag.

Jennifer has also been displaying her trimmed-down physique on social media by posting a series of snaps while on holiday with her husband Rob Tickle and their three kids.

The actress has been open about her struggles with her weight since becoming pregnant with her children and went on to ditch "fad diets" and follow a gruelling health regime to transform her figure, after revealing she had gained weight due to "self-neglect" and post-natal depression.

According to The Mirror, she said at the time: "I’d had three babies. I am happily married and content and the weight creeps on. I’m not embarrassed.

"When you sell pictures of yourself, people are going to be interested when you don’t look great. I’ve never got upset over it.

"I was in Brookside when I was 12, I’ve grown up with it. You have to take the rough with the smooth."