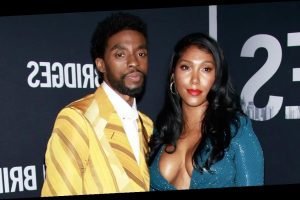 Chadwick Boseman’s widow, Taylor Simone Ledward, filed a probate case in an effort to be named the administrator with limited authority of the late actor’s estate following his death.

Ledward, 30, submitted the paperwork in Los Angeles on Thursday, October 15, according to court documents obtained by Us Weekly. The papers state that the Black Panther star died “intestate,” which means he did not have a will in place.

Boseman’s estate is estimated at $938,500 in value. His parents, Leroy and Carolyn Boseman, are listed as surviving family members.

The 21 Bridges star died on August 28 after privately battling colon cancer for four years. He was 43.

“A true fighter, Chadwick persevered through it all, and brought you many of the films you have come to love so much. From Marshall to Da 5 Bloods, August Wilson’s Ma Rainey’s Black Bottom and several more, all were filmed during and between countless surgeries and chemotherapy. It was the honor of his career to bring King T’Challa to life in Black Panther,” a statement shared via Twitter after his death read. “He died in his home, with his wife and family by his side.”

Boseman and Ledward were first linked in 2015. They quietly tied the knot in the months before his death.

Michael B. Jordan, Lupita Nyong’o and more of his Black Panther costars attended a memorial service in Malibu in September alongside Ledward. Boseman was buried at Welfare Baptist Church Cemetery in Belton, South Carolina, earlier that month.

The 42 star’s brother Derrick Boseman opened up about the late stages of his sibling’s health battle in an emotional New York Times interview earlier this month. “[He told me,] ‘Man, I’m in the fourth quarter, and I need you to get me out of the game,’” he recalled. Derrick then “realized that he was tired” and “he was ready to go.”

The pastor added that the moment shifted his perspective about his brother’s illness. “When he told me that, I changed my prayer from, ‘God heal him, God save him,’ to ‘God, let your will be done,’” he said. “And the next day he passed away.”

END_OF_DOCUMENT_TOKEN_TO_BE_REPLACED

END_OF_DOCUMENT_TOKEN_TO_BE_REPLACED
We and our partners use cookies on this site to improve our service, perform analytics, personalize advertising, measure advertising performance, and remember website preferences.Ok