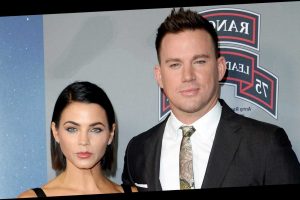 The former couple have settled on 50/50 joint custody of their daughter, Everly, 6, and have agreed to not exploit her for any social media advertisements, including sponsorships or campaigns, without the other party’s consent, The Blast reported on Saturday, January 25.

Tatum, 39, and Dewan, also 39, have reportedly agreed to work with counselor to develop a custody schedule that splits holidays equally amongst the two.

The news of the exes custody agreement comes one day after Tatum defended his girlfriend, Jessie J, at the expense of his former wife.

The Logan Lucky actor shared a photo of himself and Jessie, 31, on Instagram for the first time since their brief split on Friday, January 24. “Jenna looks better with you,” a user commented on the photo, to which Tatum to replied, “hey Alex I don’t usually address s–t like this. But you seem as good a of terrible happy people hating thoughtless person as the rest of them.”

Channing Tatum and Jessie J: A Timeline of Their Relationship

The 21 Jump Street actor went on to say that he had no tolerance for hate on his Instagram page and only wanted to engage with followers who “support the infinite and untouchable beauty and woman that Jess is.”

“And ain’t no body more stunning and beautiful to look at but even more as a human than Jess,” Tatum wrote. “And yeah that includes my ex. Sorry about your opinion. But what i said is facts. just facts. Ok bye be careful with your actions it’s what you create for yourself.”

The Magic Mike star clarified his statement in a follow-up Instagram comment after news of his dig made headlines on Friday night.

Jenna Dewan and Steve Kazee: A Timeline of Their Relationship

“And just to be super clear for the other people that love to turn s–t around. Jenna is beautiful and amazing in her own right. But no and i mean no is more beautiful or better than anyone else,” he wrote. “Beauty isn’t measurable. It’s in the eye of the be holder. So while all you infinitely beautiful people pour over these words and try and find s–t to start s–t wit. I’m gonna be enjoying my MF night with my gorgeous lady and cuddle up in her beautiful heart.”

Dewan, who is expecting her first child with boyfriend Steve Kazee, has not commented on her ex’s statement. The World of Dance host filed for divorce from Tatum in October 2018 after nearly 10 years of marriage. The pair’s divorce has not yet been finalized, but Tatum and Dewan were declared legally single in November 2019.

The Berlin, I Love You actress first began dating Kazee, 44, in October 2018. Tatum, meanwhile, was first linked to Jessie in fall of 2018.