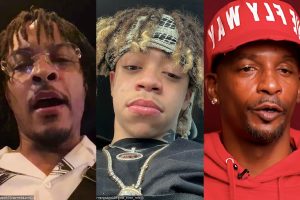 The controversial YouTuber says in a new radio interview he didn’t actually want the smoke with the Harris boys despite doubling down on his remarks about ‘misbehaved’ King.

AceShowbiz –Charleston White has explained why he has been taking aim at King Harris, which led to his public dispute with the teen and his father T.I. In a new radio interview, the comedian doubled down on his remarks about the “disrespectful” teen.

In a sit-down with radio host Dede McGuire, Charleston was asked what triggered him to diss King. “Cause I think his son ugly, unruly, misbehaved a yellow little boy,” he said calmly, insisting that he’s not “jealous” of them.

The YouTuber said he didn’t initially want the smoke with T.I. “I was just f***n with them because they were f***n with Kanye West. Just so happened, T.I.’s son was getting in trouble, so I was really f****n with them, not realizing that they would respond to my words,” he explained.

Charleston also denied that he’s scared of T.I. “He ain’t never been to jail for killing nobody. I’m scared of n***as that done killed people,” he claimed. When asked what he would do if T.I. walked into the room, he responded, “He better know how to fight.”

The interview comes one day after Charleston challenged T.I. to a fight following their phone conversation. According to the controversial social media personality, he and the rapper talked over the phone to discuss his rants against Tip’s son on Monday night, but the conversation didn’t end well.

“If I ain’t no comedian, n***a, then handle it like I ain’t no comedian,” he snapped in an Instagram video. “You ain’t dictating nothing, not this conversation. I’m the big dawg talking. I ain’t trying to get down or give a n***a one so f**k you in your p***y, Tip. That’s exactly what I just told the n***a on the phone.”

Thus, he issued the fight challenge on Tuesday, calling for “judge” Steve Harvey to serve as the referee. The Texas-based star also proposed to include their families, offering to have his own son fight King.

T.I. has not responded to Charleston’s challenge. He, however, recently expressed his disappointment as those he has considered friends, and those he has helped out did not take the time to speak out on his family’s behalf when they were being attacked. He was particularly upset by “the community” who liked, shared and partook in Charleston’s slander against his family.