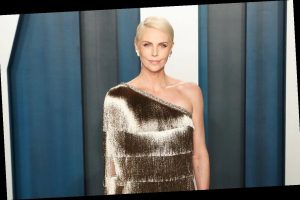 The ‘Bombshell’ actress admits she’s ‘a horrible teacher’ because she’s so bad at teaching her children while they were being homeschooled during the Covid-19 crisis.

AceShowbiz -Actress Charlize Theron has admitted she failed miserable at homeschooling during the COVID-19 pandemic.

In an interview for Vanity Fair’s 27th Annual Hollywood issue published on Tuesday (23Feb21), for which Charlize appears on the gatefold cover of the magazine alongside stars Michael B. Jordan, Zendaya, Sacha Baron Cohen, Michaela Coel, LaKeith Stanfield, Maya Rudolph, Awkwafina, and Dan Levy, “The Old Guard” star shared nothing she’s experienced during her career helped prepare her for being a homeschool parent.

“No, God, nothing prepares you. I know this for fact because I have had many boozy Zooms with other moms. Nothing prepares you for this,” she told Vanity Fair. “It’s also the first time in my life that I really had to confront how sh**ty and how terrible I am at something, like true failure.”

The Oscar-winner added she and her kids, Jackson and August, turned to undemanding TV shows for their dose of lockdown comfort.

“I watch a lot of cooking shows with my kids, a lot of Nailed It! and The Great British Baking Show,” she shared. “Those are so comforting because it’s just full inspiration for what we can bake and eat. After a while, there’s only so much you can watch with young kids before your brain explodes.”

But the main show she credits for getting them through quarantine is “RuPaul’s Drag Race“, which the family binged together.

“I will always think of that show as our family corona show that I had to prewatch every episode and figure out which ones were appropriate and which ones weren’t,” she said. “But, that was a fun family thing for us too, that just puts a smile on my face.”