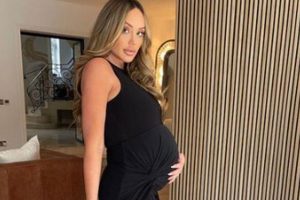 The reality star, 32, who plans to give birth on TV as part of BBC documentary, has shared two new pictures of herself and her growing bump as she marked the milestone on Saturday 25 August.

The brunette beauty shared the sponsored post and showed off her blossoming bump in a black In The Style dress.

The ankle length number featured a split up one leg, was sleeveless and knotted at one side to really show off Charlotte’s changing figure.

She posed in one snap to the side holding a black and tan bag with her other hand on her bump.

A second snap saw Charlotte front on with the dress showing her shapely figure as she stood with one foot in front, revealing her see-through heels. She also had one hand on her signature brunette hair that was styled with blonde highlights and in a curly blow dry.

Charlotte captioned the snaps to her 8.1 million followers: “And just like that she’s 8 months!!!!!

"I can’t believe I have only got just over a month to go until my little princess is here, I am so excited.

Fans were quick to gush over the reality star’s look as one wrote: “Charlotte you look absolutely beautiful.”

A third penned: “Gorgeous,” followed by a red heart emoji.

The post comes just days after Charlotte revealed her mum Letitia was diagnosed with breast cancer earlier this month, despite having no symptoms or signs.

Charlotte and Letitia, 53, said she was diagnosed after a routine mammogram, with the reality star tellingThe Sun:"Mam had no symptoms. There were no signs."

“It was just a routine mammogram, I have never missed one. When they told me it was cancer I was floored," Letitia explained.

She continued: “I had no symptoms, no lumps, nothing. The mammogram has helped save my life – they should be inviting women of all ages to one every single year. Not just women over 50.”

Charlotte went on to reveal that the devastating diagnosis lead her to have her own breasts checked after she discovered a lump just days after her mum's news.

“I became so much more aware of my own body. And then I found a lump literally just after mum was diagnosed," she explained.

“I went to get it checked out straight away. Luckily it was nothing bad.”