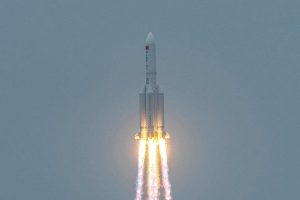 The Vegas odds paid off this time, because debris from the Chinese Long March rocket conformed to the probability it would crash down on water.

Parts from the wayward booster landed in the Indian Ocean, pretty close to the Maldives.

It’s good news, because no one had any idea where the space junk would hit. It was out-of-control in space and the re-entry was, to say the least, dicey.

There’s unconfirmed video which seems to show debris falling from the sky over the Dead Sea in Jordan.

The biggest piece of debris was about as big as a Mac truck, so it could have done serious damage if it landed in a populated area.

China’s Manned Space Engineering Office claims most of the debris burned up during re-entry, but clearly not all of it did.

This is one of the biggest, uncontrolled objects from space ever to hit the earth, and that includes meteors, folks!

China has been criticized for allowing a booster to just float around in space.  There was no plan to safely bring it back to earth.

NASA was critical but measured, saying, “Spacefaring nations must minimize the risks to people and property on Earth of re-entries of space objects and maximize transparency regarding those operations,” adding, “China is failing to meet responsible standards regarding their space debris.”