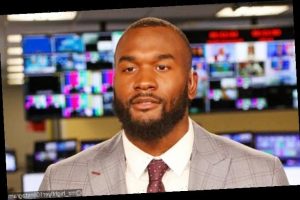 The Indianapolis Colts player claims that he was wrongly kicked out of a Chipotle restaurant in South Carolina after a fake complaint by a white patron, all because he’s black.

AceShowbiz -Chipotle has taken action after NFL star Darius Leonard claimed that he was racially profiled and kicked out of the restaurant because he’s black. The chairman and CEO of the restaurant chain released a statement on Thursday, June 25, saying that they have suspended a manager at the outlet in Florence, SC, where the football linebacker was dining out with his family, while waiting for the result of an investigation into the matter.

Brian Niccol wrote, “We have a zero tolerance policy for discrimination of any kind and we have suspended our manager while we conduct a thorough investigation.” He added that he has personally reached out to Darius, “and I’m committed to ensuring the appropriate action is taken once the investigation concludes.”

Brian’s statement was in response to Darius’ claims that he was wrongly kicked out of a Chipotle restaurant in South Carolina when he was eating with his family, “3 other Black guys and a mixed woman,” on Thursday. In an Instagram video, the 24-year-old athlete said another patron, a white male, made a fake accusation about him and his companions.

“Toward the end of our meal, the manager come up … with a terrible attitude, asking us do we have a problem,” Darius recalled. “He’s saying that a white guy said we was verbally abusing him, talking trash to him.”

“It was basically a lie. We basically got kicked out of Chipotle because of that. They said that they wanted to call the police on us. That’s what being Black in America is right now,” he continued. “We’re talking about Black Lives Matter and for the guy to look at us and lie and laugh in our face as we walk out and the manager … just come up here and just basically kick us out of Chipotle?!” he said in the video.

“We are tired of this,” the Indianapolis Colts star went on lamenting. “I’m telling you what I go through as a Black man in America. Ya’ll don’t understand what I go through.” Bringing up the racial injustice in the country, he said, “Ya’ll see the police killing us. Ya’ll seeing all the injustices that we go through. I live it. Day in and day out. And, I’m f**king tired of it. Yes, I’m upset. I’m tired of it.”