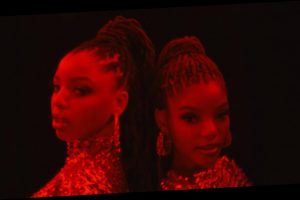 The sister duo’s new visual is just the latest from their most recent album, also titled Ungodly Hour.

Just before the music video release, it was announced on the Tonight Show Starring Jimmy Fallon that they will be releasing a Chrome Edition of the album this week.

“The Chrome Edition of their album Ungodly Hour is out this Friday, along with the vinyl edition,” Jimmy said, before introducing the debut of their music video.

“currently on set shooting but 👀👀👀👀 so many exciting things tonight,” Chloe tweeted earlier in the night.

Halle is also filming, as she is currently over in London filming the live action The Little Mermaid.

You can check out Chloe and Halle weekly on their Freeform series grown-ish, which airs Thursdays at 10pm ET/PT.

If you missed it, the girls recently starred in a new fashion campaign with a bunch of other celebs!