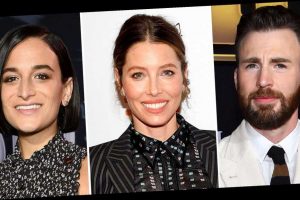 Still searching for his perfect match. Chris Evans has been through his share of ups and downs in his dating life, but is holding out hope that he’ll find The One someday soon.

The Not Another Teen Movie actor’s love life has captivated fans ever since his high-profile relationship with Jessica Biel. The former couple began dating in 2001 and worked alongside one another in two films, London and Cellular, throughout their relationship. Though they called it quits in 2006, the 7th Heaven alum had high hopes for their future together.

“We always talk about [marriage]. We both want to be married, and we both want to have children,” Biel told Cosmopolitan one year before her and Evans’ split. She eventually tied the knot with Justin Timberlake in 2012 after nearly five years together.

After his breakup with Biel, the Marvel franchise star briefly dated up-and-coming actresses like Minka Kelly and Dianna Agron — and was even linked to superstar Sandra Bullock in the wake of her 2010 divorce. He didn’t find himself in another long-term relationship until he fell for Gifted costar Jenny Slate in 2016. They called it quits in February 2017, but still had a huge amount of love for each other in their hearts.

“He’s really vulnerable, and he’s really straightforward,” Slate told Vulture of her ex one month after their split. “He’s like primary colors. He has beautiful, big, strong emotions, and he’s really sure of them. It’s just wonderful to be around. His heart is probably golden-colored, if you could paint it.”

The duo gave their romance a second try, but ended things for good in March 2018. Despite his struggle to find a lasting love, Evans is hopeful that he’ll have a family of his own in the near future.

“I definitely want children. I definitely want a family. But you cannot put the cart before the horse,” he told USA Today after his split from Slate. “The family only works if it’s built off the extension of the love you feel for a person. If you all of a sudden want the kid more than you want the relationship, you may be on shaky ground.”

Since his most recent breakup, an insider revealed to Us that the Knives Out star has been “dating different women and is having fun,” but wants to “be more private with his love life.”

Scroll down to relive Evans’ most famous relationships and flings.