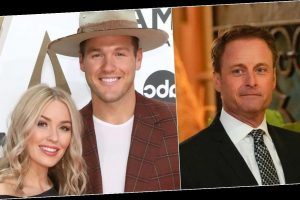 Chris Harrison was just as shocked as most of Bachelor Nation to hear about Colton Underwood and Cassie Randolph’s relationship drama. The longtime Bachelor franchise host opened up about the pair’s “unfortunate situation” while speaking with ET’s Lauren Zima on Tuesday.

“I’ve reached out, just as far as support,” Harrison said. “I have not talked to them and I am very glad to see that they … [are] taking this off-line. They’re not settling this in the press, they’re hopefully taking care of themselves and each other and being smart about this.”

“I just wish them both well, I wish Colton and Cassie well,” he continued. “It’s a very unfortunate situation for sure, and I think a surprising one. Honestly, it was a pretty shocking headline.”

Randolph was granted a temporary restraining order against Underwood last month, four months after they split in May. The Bachelor couple had been together for a year and a half.

A source close to the situation told ET that Randolph and Underwood were trying to stay friends following their split. Their breakup announcement seemed amicable, but things got messy when they later took to Instagram to speak out about each other discussing the split.

ET’s source said that Randolph began to receive strange texts from an unknown number, and allegedly found a “tracking device” on her car. According to the source, Randolph confronted Underwood and he admitted to “everything.”

Underwood allegedly then “went to Colorado to take some time to regroup,” the source said, and when Randolph heard he was coming back to Los Angeles, she filed the request for the restraining order.

“Of course she’s been upset by the situation,” the source told ET. “It’s serious. But she is focusing on herself and her schoolwork and trying to move forward.”

See more on Randolph and Underwood in the video below.

END_OF_DOCUMENT_TOKEN_TO_BE_REPLACED

END_OF_DOCUMENT_TOKEN_TO_BE_REPLACED
We and our partners use cookies on this site to improve our service, perform analytics, personalize advertising, measure advertising performance, and remember website preferences.Ok