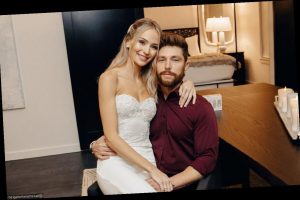 The country star and his ‘Bachelor’ alum wife, who shares a sonogram video on social media, are expecting their first child together a little over one year after tying the knot in Nashville.

AceShowbiz –Chris Lane has a fun take on Lauren Bushnell‘s pregnancy announcement. Shortly after his wife informed her social media followers that the two of them are expecting their first child together, the country star threw in one hilarious reaction in the comment section of her post.

On Sunday, December 6, Lauren shared the exciting news by posting on Instagram a sonogram video of her baby. Playing in the background of the clip was Chris’ hit song “Big, Big Plans”. In response to the online revelation, the 36-year-old singer/songwriter quipped, “Hunny when were you gonna tell me you were pregnant?”

Lauren’s post itself was accompanied by a message that read, “A dream. Except I’m not dreaming. I’m wide awake. Holding your dads hand, watching you dance around in my belly.” It continued to read, “Listening to your little heart beat. My new favorite sound. A miracle. New life. Our sweet baby. Thank you Jesus! All the glory belongs to You.”

Chris has also put out the same clip on his own Instagram page. However, the “I Don’t Know About You” crooner offered a different accompanying message as he declared in his, “Prayer works!” He added in the same caption, “Hope you look like your Mama @laurenlane.”

Sharing further details about how they found out about the pregnancy was Chris’ wife Lauren. “The Bachelor” alum told PEOPLE, “I just had a feeling so I took a pregnancy test. There really wasn’t anything physical happening; I just had a funny feeling I was pregnant.”

“I took a test and believe I was about three-and-a-half weeks at that point, so the second line was very faint. I showed Chris and he didn’t believe the test. We went to the store together and bought a digital test and it clearly read ‘pregnant,’ ” she continued explaining. “I think I took about 10 more still in disbelief! Because I was so early we both were shocked but cautiously optimistic!”

Chris and Lauren tied the knot in Nashville, Tennessee in October 2019, four months after they got engaged in Oregon. Back in October 2020, the “For Her” crooner celebrated their first wedding anniversary by writing on Instagram, “Happy Anniversary @laurenlane I can’t believe it’s been a year!! Love you. Here’s to gettin old and grey together.”

END_OF_DOCUMENT_TOKEN_TO_BE_REPLACED

END_OF_DOCUMENT_TOKEN_TO_BE_REPLACED
We and our partners use cookies on this site to improve our service, perform analytics, personalize advertising, measure advertising performance, and remember website preferences.Ok