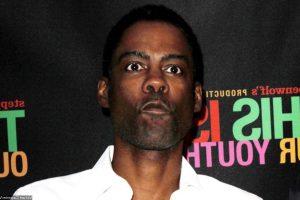 During his comedy show in Indio, California, the ‘Grown Ups’ star also tells the audience that he is ‘OK’ and jokes about getting his hearing back after the slap.

AceShowbiz –Chris Rock is seemingly set to capitalize on his Oscars slap drama. The comedian, who has not had an official interview since he got slapped by Will Smith, has declared that he’ll only talk about the incident if he gets paid.

The 57-year-old reportedly made the statement during his comedy show at Fantasy Springs in Indio, California on Friday, April 8. According to the Palm Springs Desert Sun, he said to the crowd, “I’m OK, I have a whole show, and I’m not talking about that until I get paid.”

Keeping a positive attitude, Chris assured the audience, “Life is good.” He then joked about getting his hearing back after getting smacked across the face by Will, adding, “I got my hearing back.”

Chris, who wore white jeans and a dress shirt, also joked about the Kardashians’ preference of men, quipping that they “love black people so much they take anyone in.” He reportedly received a standing ovation after ending his joke on divorce and referring his friends to his ex-wife’s attorney.

Chris first broke his silence after the Oscars slap during his set in Boston on March 30. “I don’t have a bunch of s**t about what happened, so if you came to hear that, I have a whole show I wrote before this weekend. I’m still kind of processing what happened,” he told the crowd at the time.

The “Saturday Night Live” alum added that he would eventually talk about it later, “So, at some point I’ll talk about that s**t. And it will be serious and funny.” He also suggested he hasn’t talked to Will Smith after the slap, saying, “I haven’t talked to anyone despite what you may have heard.”

Meanwhile, Will himself has apologized for his behavior at the 2022 Academy Awards, acknowledging that it “was unacceptable and inexcusable.” He was later banned from the Oscars for the next 10 years. “I accept and respect the Academy’s decision,” the “King Richard” star simply responded to the ban.