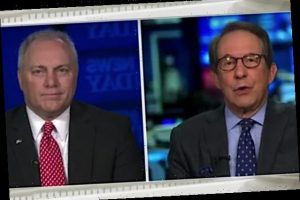 Fox News Chris Wallace put the screws to House Minority Whip Steve Scalise on “Fox News Sunday,” confronting him about the Texas lawsuit that would have tossed out millions of votes in four key battleground states.

“You were talking about disenfranchising the 10 million Biden voters who supported [President-elect Joe Biden] in those four states,” Wallace said. “Do you feel comfortable throwing out millions of votes of your fellow Americans?”

Although Scalise insisted “nobody wants any votes thrown out,” Wallace pointed out that is what the lawsuit would have done.

The lawsuit in question challenged election results in Georgia, Pennsylvania, Michigan and Wisconsin on the basis that those states put into effect pandemic-related changes to the voting process that, Texas said, were illegal. The U.S. Supreme Court tossed out the lawsuit on Friday. Writing succinctly, “Texas has not demonstrated a judicially cognizable interest in the manner in which another State conducts its elections.”

“Let’s let this legal process play itself out,” Scalise responded, adding that “Joe Biden has been going through a transition with President Trump supporting him.”

Wallace, who has come down hard on the Trump administration numerous times in the past, also asked Scalise about the federal investigation into Hunter Biden’s taxes, mentioning that the president elect asserted that his administration’s Justice Department would operate independently and not with executive influence.

“I’m sure whoever [Joe Biden] puts up for attorney general will be heavily scrutinized by the United States Senate,” he responded.

You can watch the complete interview above.

END_OF_DOCUMENT_TOKEN_TO_BE_REPLACED

END_OF_DOCUMENT_TOKEN_TO_BE_REPLACED
We and our partners use cookies on this site to improve our service, perform analytics, personalize advertising, measure advertising performance, and remember website preferences.Ok