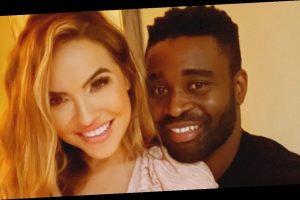 Chrishell Stause is opening up about her split from Dancing With the Stars pro Keo Motsepe.

Hours after news broke that the two have decided to go their separate ways, the Selling Sunset star took to Instagram Stories to react to source reporting from various outlets. In her posts, Stause accused Motsepe of being a liar. The two met on season 29 of the dance competition show. Stause was paired with Gleb Savchenko, while Motsepe competed with Anne Heche.

“Welp! How it started,” Stause wrote in the first post, accompanied by a screenshot of an article from E! News that stated their breakup was “friendly and cordial,” just not the right fit or right timing.

The second post, which she captioned “how it’s going,” included quotes from a “source close to Motsepe” who told People, “Keo is heartbroken. He enjoyed his time with Chrishell and was 100 percent in it. He’s had a tough time with his mom’s passing, but he really wanted to make his relationship last.”

Stause wrote in response that she “TRULY wanted to keep this drama free, but playing the victim and bringing your mom into it is a step too far for me.”

“Taking the high road is overrated sometimes!!” she continued. “I was also 100% in it as well, until revelations told to me recently have made me question if you could even order a coffee without the lying.”

The third slide, set to Beyoncé and Shakira’s “Beautiful Liar,” featured a “swipe up” prompt with a link to an article titled Liar, Liar: How to Break Free From Habitual Lying. This is the second time this week Stause has used the term “liar” in her Stories. A few days ago, the reality star posted a meme that jokes about how funny it is “when a liar’s pants don’t actually catch on fire.”

It appears she has also deleted all posts of Motsepe on her Instagram.

A source ET earlier on Friday that Stause and Motsepe ended their relationship earlier this week, just weeks after Stause finalized her divorce from This Is Us star Justin Hartley. “It was a mutual break up with no hard feelings on either side,” the source said. “They both felt like it was time to move on from the relationship, but remain cordial and friendly.”

Hear more on the couple in happier times in the video below.