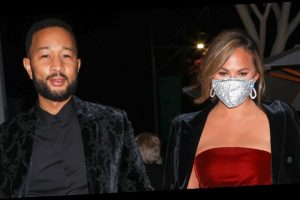 Chrissy Teigen shows off her long legs in a hot red velvet dress with husband John Legend while heading to a Grammy party in Los Angeles on Sunday (March 14).

The hot couple held hands as they arrived to celebrate the winners for music’s biggest night.

Much earlier in the day, John won the Grammy for Best R&B album, and Chrissy “interviewed” him while at home and shared it with her fans online.

“John, you just won R&B album of the year! How are you going to celebrate?” she asked.

He jokingly replied, “By mincing garlic!”

After his win, John did post a thank you to his team on Instagram, to which Chrissy took a bit of issue with, as he did not thank her.

Just last week, Chrissy and John were seen out and about in New York City.