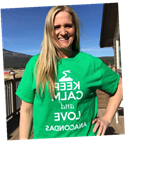 Like so many of us, Christine Brown is disgusted by what transpired at the U.S. Capitol on Wednesday afternoon.

How can anyone not be, after a contingent of Donald Trump supporters attacked this government building and were responsible for mass mayhem, not to mention five deaths?

Unlike most of us, however, the Sister Wives star has a very specifiic — and unusual — idea for how to fix a divided country.

Christine took to Instagram stories on Thursday afternoon to express how disappointed she was about what happened, opening up to herr multitude of followers from her car.

“Car confessions! So, of course, my heart is heavy today with everything that happened at the Capitol yesterday,” the TLC personality said, continuing:

“It was so hard to watch and I wish that people would just be kind, and let the democratic process that we’ve been fighting for happen.”

We could not agree more, but it’s been a challenge because the President and many members of his party have been lying to the public about voter fraud and straight-up encouraging violence.

What can be done to solve such a deap-seated problem?

… but used as the basis for an insurrection?

Brown has a proposal.

“Anyway, we are watching it and I debated whether I wanted to sit with my kids and I did,” she went on.

“We watched it all together, we were scared at some points, and we talked about it some more and then we flipped it to My Little Pony.

“For some reason, the animated ponies can work together and figure things out, even though they come from two opposite sides.”

In other words, if the cartoon cast members on My Little Pony can come together… why can’t the citizens of our country?

There’s a lesson to be learned here!

“It was bizarre how the My Little Pony episode, if we could just all watch that, not just the leaders in America, but all of the people in America watch My Little Pony and learn from it, I’m pretty sure yesterday wouldn’t have happened.”

We don’t wanna make too much fun of Christiine here because her heart is in the right place.

But we’re sadly way past the point in America of having certain voters watch a show about ponies finding common ground… in order to find some on their own with the opposite side.

These folks do not believe in facts.

The leaders they have chosen are purposely misleading them purely out of a power grab.

In response to the riots on Wednesday, Twitter has permanently banned Donald Trump because he’s been inciting violence on the platform.

There’s a very good chance he’ll also be impeached for a second time.

Heck, even a newspaper owned by Rupert Murdoch says the President should resign.

Trust us, Christine, we wish My Little Pony episodes could solve this crisis.

Alas, we’ve crossed a very frightening rubicon at this point.