Clare Crawley and Dale Moss Gush Over Each Other After Engagement 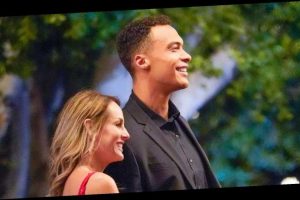 Love is in the air! Clare Crawley and her fiancé, Dale Moss, could not be happier after watching their engagement play out on The Bachelorette.

From 1st Rose to Forever? Clare and Dale’s Relationship Timeline So Far

Moss, 32, gushed about the reality star, 39, on social media shortly after the couple got engaged during the Thursday, November 5, episode of the ABC dating series.

“Never a point I won’t show up for you @clarecrawley,” the former NFL player wrote via Instagram, posting photos of the proposal. She also shared photos of the couple, writing, “It’s official!! Love wins!!!! 💍❤️!!! I love you @dalemoss13!”

The couple’s whirlwind romance finished with Crawley professing her love for Moss after two weeks of filming season 16 of the show. The South Dakota native reciprocated the Sacramento, California, native’s feelings after earning the final rose on Thursday’s episode.

Everything Bachelorette Clare Crawley Has Said About Dale Moss

“When you got here, it was like electricity for me because I knew that I had just met my husband. You embodied everything that I want in a man,” Crawley told Moss. “I’m just so in love with the man that you are.”

He echoed her sentiments, saying, “I know without the shadow of a doubt that you would go to the end of the world for me and I’ve never had that. I’m so grateful for that.”

Moss told the Bachelor Winter Games alum he loved her, and she whispered, “I love you too … The best is yet to come”  before he got down on one knee and asked her to marry him.

“Put that ring on my finger, I’ve waited a lot of years for this,” she said. She then called herself “Clare Moss,” showing off her new sparkler.

Before Crawley’s finale episode aired, she was spotted with a large diamond ring on her left hand while shopping in her hometown on Thursday afternoon.

Everything Clare Crawley Has Said About ‘The Bachelorette’ Switch-Up

The photos surfaced one week after an episode of The Bachelorette aired in which Crawley called Moss her “fiancé” while talking to a crew member.

Us Weekly previously reported that the Bachelor in Paradise alum fell hard for Moss during the first few weeks of filming and decided to leave the show early. As a result, Tayshia Adams stepped in to search for her happily ever after.

The Bachelorette airs on ABC Tuesdays at 8 p.m. ET.

END_OF_DOCUMENT_TOKEN_TO_BE_REPLACED

END_OF_DOCUMENT_TOKEN_TO_BE_REPLACED
We and our partners use cookies on this site to improve our service, perform analytics, personalize advertising, measure advertising performance, and remember website preferences.Ok