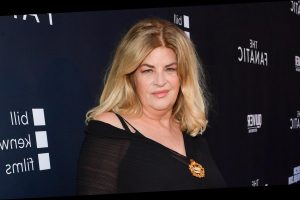 We might know more about the coronavirus than we did in the springtime when COVID-19 made its debut, and some of us might have anticipated it would be making a comeback in the fall, but it is still a shock to see the numbers nonetheless. The BMJ says Europe is getting hit particularly hard by a second wave of infections, with Belgium reaching its testing capacity; France seeing 30,000 positive cases in one day (doctors say the second wave is “worse than the first”); and Germany reaching daily highs in the number of new cases. Ireland became the first country in the European Union to reenter a six-week “circuit breaker” lockdown because its testing resources are strained. In the U.S., daily totals have passed the highs reached in July with a total of 45.3 million cases recorded (via The New York Times).

But this doesn’t seem alarming enough for Kirstie Alley, who tweeted, “I now Know why my personal friends who walk around in SHEER TERROR of contracting Covid are simply CNN viewers! I decided to watch CNN myself to get a their viewpoint and oh my God DID I EVER!!!! IF YOU TOO WANT TO LIVE IN TERROR WATCH CNN!! FEAR OF DYING IS THEIR MANTRA! OMG!”

Kirstie Alley fans were not amused by CNN's sass

Given that CNN is probably more than a bit annoyed with people who refuse to start taking the pandemic seriously, CNN Communications clapped back at Alley’s tweet, saying: “Kirstie, you are welcome to change the channel — just like countless viewers did every time ‘Veronica’s Closet’ came on TV. But don’t downplay the loss of nearly 230K American lives. And please, wear a mask.”

Fans of Kirstie Alley and her show Veronica’s Closet weren’t too amused by the comment and responded by taunting the news company in return. Dozens of replies poured in, with many pointing out: “Pretty sure Veronica’s Closet had higher ratings than CNN”. One Kirstie Alley fan tweeted: “Did a wannabe-snarky intern write this? Just trying to estimate the level of professionalism CNN’s public relations team has. Not finding any at the moment, but I’m sure it’s there somewhere. (That, by the way, is an excellent way to push even more people away from watching.)”

Alley wasn’t going to take the accusation that she didn’t take mask-wearing sitting down. “Find ONE tweet I’ve tweeted to encourage people NOT to wear masks or NOT be careful or that has said anything disrespectful about sick people or those who have died … there isn’t one. THIS is how FAKE information spreads like” she tweeted with a picture of hot flowing lava. On October 5, though, she did tweet: “Instead of masks might I suggest we put corks in our nostrils and towels stuffed in our mouths… it’s proven by the CDC to prevent Covid spread.”

But her last tweet didn’t sit well with one healthcare worker who responded by saying: “You are minimizing this deadly virus. I’ve worked in healthcare 30 years I have dozens of friends who are working in intensive care units and ERs right now who are overwhelmed with these patients and other patients are not getting the care they need.” Another took on the task of explaining the social media tweetstorm, telling Alley: “You correlate fear to the media — disingenuous. The statistics are ominous and fearful. Media is doing its job advising masks and notifying of escalation in specific areas. What are YOU doing? Implying ‘fear’ is ‘overdone’ as virus skyrocket is not helpful. Get with it, safety #1.”

END_OF_DOCUMENT_TOKEN_TO_BE_REPLACED

END_OF_DOCUMENT_TOKEN_TO_BE_REPLACED
We and our partners use cookies on this site to improve our service, perform analytics, personalize advertising, measure advertising performance, and remember website preferences.Ok