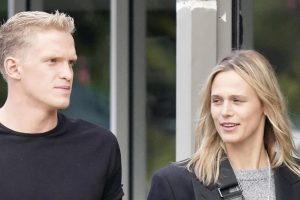 Cody Simpson and girlfriend Marloes Stevens step out for a cup of coffee on Wednesday (June 2) in Gold Coast, Australia.

The couple shared a cute moment while leaving the coffee shop, with their drinks in hand.

Cody and Marloes have been in Australia since the beginning of April, and have remained there since, as he actually moved back home.

The duo headed Down Under as Cody was competing in the Australian National Swimming Championships.

Cody recently opened up in a new interview about how him training for the Olympics was nothing new for those who really know him.

“Anyone who knew me before isn’t surprised,” he told GQ Australia. “From about nine until 13 years old, I was doing the same thing with school in between. I was still getting up and diving in the pool at 5.30am, and then going to school and coming back to the pool and training again. So I was very much disciplined from a young age into that regimen.”

“I was never under any delusions,” Cody added about his chances of competing in Tokyo. “Making the team for me this year is a long shot. Anyone trying to do it in less than a year is nuts and to pull it off, you’d have to be Hercules. But I’m certainly a lot closer than I thought I’d be at this point. Initially I didn’t think I’d be competitive until I’d had at least two years of training under my belt. So the fact that I can even compete at trials and be top eight, top 10 in the country for my event is really cool. If you’d told me that when I started training, I don’t think I’d believe you.”