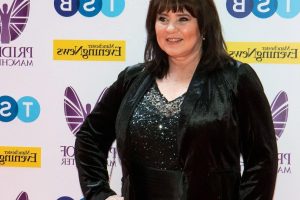 Coleen Nolan has revealed she will speak out about the Loose Women feud rumours "when she can".

The Loose Women star, backed by a number of her fellow cast mates, has categorically denied claims a number of her co-stars had refused to work with her following claims over the weekend.

Coleen, 56, told her Twitter followers she was "taking legal advise about the slurs" made about her in the reports on Sunday.

She added: "We’ll also be addressing it on @loosewomen".

The TV star later concreted her plans to confront the reports as she responded to a Twitter follower, who asked: "Why can't this all be confirmed live in front of the nation? Whether it's true or not."

Coleen then replied: "It will be discussed today on Loose Women. 12.30pm on ITV."

But, during her appearance on Monday 10 January Coleen did not mention the speculation and instead spoke of her love of looking in other people's fridges.

Loose Women viewers then shared their disappointment on Twitter as one wrote: "Is this a joke? I tuned in especially to hear what Coleen had to say after she SAID she was going to address the rumours".

Another asked: "Why did Coleen say she was going to open up about the fallout and then she didn't? Pretty fishy to me".

The as third fumed: ""What a waste of my time. Honestly, the most boring Loose Women show I've ever watched".

Coleen later explained why she was unable to address the rumours and insisted she will speak out when she is able to.

She wrote: "I’m so sorry we couldn’t say what we planned to today but my lawyer advised me to go through the legal process, but rest assured you will hear the outcome of this and I will share it when I can.

"Thank you all for your support as ever, Love Coleen x".

And fans were quick to share their support and understand to the star as one said: "I did think you may have been advised not t say anything. Was waiting for it . Good luck with your out come".

Another added: "You have nothing to be sorry about coleen hope you get it sorted we all love you".

While a third said: "I thought it quite obvious you wouldn't be able to say anything. Let the lawyers deal with it. Get 'em!!"

To read more about the Loose Women stars and much more, sign up to our daily OK! Newsletter.