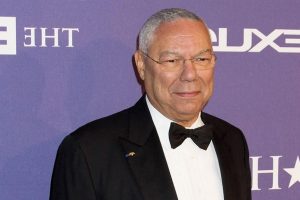 The former U.S. Secretary of State has passed away at the age of 84 after suffering from complications following Covid-19 diagnosis despite being fully vaccinated.

The Republican politician, who helped shape U.S. foreign policy during the late 20th/early 21st century, was fully vaccinated against coronavirus, his family confirmed.

They said in a statement, “General Colin L. Powell, former U.S. Secretary of State and Chairman of the Joint Chiefs of Staff, passed away this morning due to complications from Covid 19.”

“We have lost a remarkable and loving husband, father, grandfather and a great American. (sic)”

He went on to become the youngest and first African American chairman of the Joint Chiefs of Staff under President George H.W. Bush.

Powell hit peak popularity in the mid-1990s following the U.S.-led coalition victory during the Gulf War and was hotly tipped to become the first Black President of the United States.

However, his reputation faltered when, under Bush’s leadership, he pushed faulty intelligence before the United Nations to advocate for the Iraq War. He later called the incident a “blot” on his record, reported CNN.

He later grew disillusioned with the Republican Party’s views and went on to help elect Democrats to the White House, most notably Barack Obama, the U.S.’s first Black President.

Powell is survived by his wife, Alma Powell, whom he married in 1962, as well as three children.