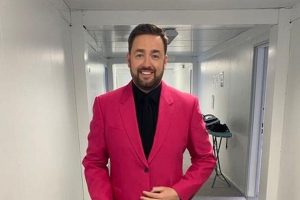 Taking to Instagram the 40 year old posted a photo of the towering tree with the playful caption: "Is there even such a thing as ‘too big?’" followed by Christmas tree emojis.

Taking to the comment section, fans and friends of the star shared their thoughts.

"That must smell divine," wrote one, while another added: "What a whopper."

A third penned: "Go big or go home. We did wonder who buys those giant trees wen we went to get ours."

Others were quick to note that with the size of Jason's kitchen he could definitely fit a tree of that size in the space.

Jason's home looks huge, with a wide space that could house more than one large Christmas tree.

The floors are beautifully patterned and an L-shaped green sofa can be seen inside the open plan space.

In the final snap one of Jason's children can be seen sitting in front of the tree.

We also get a peek at the kitchen which boasts a large island and matte green cupboards.

In another shot, one of Jason's cats can be seen checking out the Christmas tree.

Jason is a dad to six kids, and in a recent chat with OK! he opened up about his role as a father.

"Like any parent juggling life and work it’s always difficult, but I just don’t separate the two really. Work is life and life is work and the kids have nice things because I go to work," he told us.

The star also admitted that his daughter was "fuming" with him when she found out he was on the Masked Singer.

"I didn’t tell the kids – you’re not allowed to. But my daughter was watching and her pals were saying, “That’s your dad,” and she said, “I think I’d know if that was my dad.” When the mask came off she was fuming," he explained.

The comedian made a New Year's resolution to lose weight this year, and shared a look at the results in June.

It wasn’t just his health that made him want to get fit, as he also vowed to improve his mental health and body insecurities.

Speaking to the Mirror, the Mancunian shared how his weight has affected his confidence over the years.

He said: “I think I've thought about my weight every day of my adult life.

“Not crying about it, but gone upstairs and tried to put something on that doesn’t fit, or got out of breath chasing the kids.”

Despite the ongoing pandemic Jason successfully dropped from 17 stone 5lbs to 14 stone 10lbs.