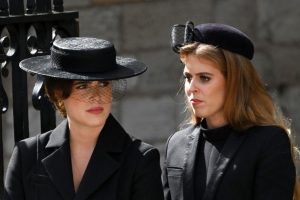 Royal fans were left confused as Princesses Beatrice and Eugenie appeared to leave their grandmother the Queen's funeral early on Monday 19 September.

As the emotional service at Westminster Abbey was coming to an end, Eugenie, 32, and Beatrice, 34, were seen leaving their seats before other Royals.

Their mother, Sarah Ferguson, appeared to go to follow her daughters as she stood up but then sat back down in her seat.

After the service, Beatrice and Eugenie were seen standing at the entrance of Westminster Abbey with the rest of the Royal Family. They were later seen following the procession in a car along Whitehall.

Taking to Twitter, one Royal fan wrote: "Anyone know why Eugenie and Beatrice left mid ceremony? Sarah Ferguson almost left with them but seems to have been told not to?"

A different account put: "Where did Beatrice and Eugenie go? #queensfuneral."

Another follower said: "@RoyalCentral what happened to Beatrice & Eugenie at end?"

While a different person added: "Did you notice before end of service mass that Eugenie & Beatrice stepped away from their seats."

It comes as Beatrice and Eugenie looked after their mother Sarah in a sweet moment at the Queen's funeral.

As the Queen's grandchildren entered Westminster Abbey, Eugenie and Beatrice, who were joined by their spouses, were seen turning around to look for their mother.

The two sisters then spent a few moments encouraging the Duchess of York, 62, to join them as they made their way inside the church to their seats.

But Sarah sweetly shook her head as she declined the offer, instead letting the Queen's other grandchildren, Lady Louise Windsor and James Viscount Severn, go in front of her.

The sweet moment wasn't missed by Royal fans as one person tweeted: "Sarah stood back to allow Louise and James to go ahead of her when entering with Beatrice and Eugenie which I thought was very thoughtful of her."

During the service, Princess Beatrice looked overcome with emotion at one point while the Countess of Wessex was spotted dabbing a tear from her eye.

Sarah, also known as Fergie and who divorced Prince Andrew in 1996, has said the Queen was "the most incredible mother-in-law and friend" to her and she would miss her "more than words can express" in her tribute after the late monarch’s death.