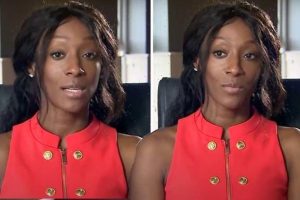 Victoria Ekanoye, 40, best known for playing Angie Appleton in Coronation Street, has spoken out about how she is “doing what she can” ahead of her double mastectomy this Friday. The actress was diagnosed with breast cancer after finding a lump whilst breastfeeding her son.

As she prepares for the operation, Victoria says she is “living as much as she can”.

Victoria said: “The operation is on Friday so I’m living as much as I can up until that point.

“Not that I won’t be afterwards, but I will be off my feet for a while.

“I’m just trying to do what I can, help out with my charities and enjoy life,” she added while speaking to OK! Magazine at The Mirror People’s Pet Awards.

Fighting back tears, she told the panellists: “I don’t want to be looking over my shoulder for the rest of my life.

“I’ve got a baby boy to love and live for, and a family and friends.

“I just can’t even begin to think about not being here for any of them. So, for me, if I can eliminate as much risk as possible then I will.

“Yes it’s a more invasive procedure, yes it’s a longer recovery time, but ultimately if it can take that large amount of risk away, it’s peace of mind and good for my mental health to not have to worry about it every day.”

She discovered a lump in her breast while feeding her son, Théodore, when he was just six-months-old.

The Corrie star said she could see the lump “very clearly” and it had gotten so big she didn’t even have to look for it.

At first, doctors thought the lump was benign. But Victoria sought a second, and third, opinion because “it didn’t feel right”.

Eventually she got the diagnosis she was dreading and is now encouraging others to “take ownership” of their body and check their breasts every month.

After her mastectomy, Victoria will enjoy her first Christmas with 11-month-old Théo and her partner Jonny Lomas.

On her Christmas plans, she told the publication: “We’re going to spoil him as much as we can. I’ve considered wrapping up presents he already has because he doesn’t actually care.

“He’s such a joy and I think it’s going to be so fun to see him ripping the paper open.

“I can’t believe it [will be his first Christmas]! He’s going to be one in January as well, which is mad.”

Victoria, who also has Sickle Cell disease, has used her platform to raise money for charities close to her heart.