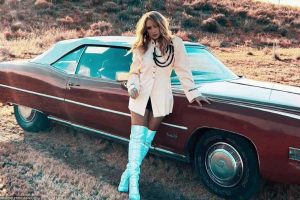 Detailing the terrifying incident that happened in Nashville, the ‘Tuxedo’ hitmaker reveals that the driver ‘slammed her face-first down into a ditch’ before she called 911.

AceShowbiz –Clare Dunn has recalled a terrifying moment in her life. In a new interview, the “Cowboy Side of You” singer detailed how she was left bruised and bleeding after a Lyft driver assaulted her in Nashville.

“I had that intuition that something was wrong, and I ignored it,” the 34-year-old country singer began telling PEOPLE on Thursday, August 5. Offering the details of the assault that happened in the early morning hours of June 26 and left her face bruised and bleeding, she admitted that she and another friend ordered a Lyft to go home after enjoying a night out. The Lyft driver dropped her friend off and then she was alone with him, who she said was a “6’2′-6’3′ 250 lb. man.”

Clare asked the driver to go to her residence, which was located 10 miles away. Since the “Tuxedo” hitmaker wanted to avoid the highway, she requested that the driver take the “slower route.” However, she soon noticed that he was ignoring her request.

“We were barreling towards the interstate and I spoke up and was like, ‘Hey, that was my turn. Where are you going? You need to take the next right turn,’ ” Clare recounted. She then claimed that the driver became “increasingly agitated.” She added, “He was screaming at me. I couldn’t really make it out — his English wasn’t the best. And I just knew in that moment that I wasn’t going to get on that interstate with him.”

Clare continued recalling the incident that occurred while she was in Nashville, Tennessee for work, “I wasn’t going to go quietly where he wanted to take me. And I think he realized maybe this girl was going to be more trouble than she’s worth.” The driver eventually pulled over a mile away from her house and began attacking her. “Before I could even get my shoes off or get my phone to try and call 911, he grabbed me by the collar, ripped me out of the backseat and slammed me face-first down into a ditch,” she revealed.

“Somehow in the scuffle, I thought I called 911, but I didn’t even get the number right,” Clare remembered. “But it was a miracle. They called me back. And when I came to, I was screaming, and I saw headlights. He ended up just leaving me alone at that point and took off.”

Clare went to an emergency room for treatment, filed a police report shortly after the incident and has since identified the driver with the help of a detective. “As women, we sometimes do that but I think when we have those feelings, they are alarm bells. I remember just telling myself that I was overthinking it and I just wanted to go home. That’s all I remember thinking about it and just trying to tell myself, it’s fine. I blame myself,” she stated.

“This has been hell,” Clare stated. The Colorado-based singer went on saying, “I don’t want anyone else to go through it. Even if it just can keep one girl or one guy from going through this … he knew what he was doing. He hit ‘complete the ride’ after it was done. I didn’t take a screenshot of his license information during the ride. All of that goes away when a ride is completed. All I had was a little tiny profile picture and his first name. It’s a slow process if you don’t have all that info.”

Currently, there is a warrant out for the Lyft driver’s arrest and Clare believes that he will soon be caught. Though so, she wondered, “He’s out on the street — is he doing this to someone else? Does he have a wife he’s abusing? Does he have a girlfriend he’s abusing like this? Because he obviously has no regard right now.”