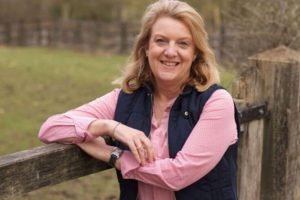 Charlotte Smith, 58, spent years believing she had a rare lung disease called lymphangioleiomyomatosis (LAM) after being diagnosed 12 years ago. The Countryfile presenter has revealed the joy she now feels after being wrongly diagnosed.

LAM – which is a cystic lung disease that primarily affects women – is an abnormality of cells that grow throughout the lungs, causing holes or cysts, blocking the airways and preventing the lungs from getting oxygen to the rest of the body.

The average survival of people with LAM is between 20 and 30 years with the right management, but many sufferers require lung transplants after 10 years, according to the NHS.

The nature enthusiast explained the initial diagnosis had left her in shock and fear for her future.

Charlotte underwent an operation for a collapsed lung four years ago, only to now be told she didn’t have the condition after all.

“They had to do an operation this time and they discovered that I am very lucky,” Charlotte said. “I do not have that disease. I was misdiagnosed.”

“Which actually I’m very relaxed about because to be told you don’t have something is much better than being told you do.”

“So I have about 80 per cent lung capacity a fit person would, but to be honest I could [do what anyone else could].”

Charlotte added she was “joyous” about not having LAM and praised the support network that helped her cope when she initially thought she had the condition.

The Countryfile presenter previously opened up to Express.co.uk about the moment her lung collapsed in 2019.

Charlotte said: “I did some publicity photos which were taken a couple of years ago and when I got home from the photoshoot, I realised that my lungs had collapsed and I was in the hospital for two weeks.”

The BBC presenter has said her condition has not impacted her day-to-day life but she had to lose some weight, which she added was “tedious”.

The mother-of-two said: “Actually day-to-day it doesn’t affect me and I’m incredibly lucky.

“Because the kind of problems I’ve had with my lungs can affect people to the extent that they need a lung transplant. So I’m really lucky.

“When I had my last operation my lung had previously collapsed and I’ve got slightly less lung capacity than the average person,” she explained.

“But also I’m a bit overweight and very lazy so I think, to be honest, I don’t think it affects me that much. I’m incredibly lucky.”

The rare lung disease predominantly strikes women during their 30s and 40s.

The Countryfile presenter first experienced symptoms back in August 2010 but is grateful to have since been given the all-clear.

Charlotte is a well known presenter on the BBC and she first joined Countryfile in 1998.

Countryfile airs Sunday on BBC One at 5.20pm.