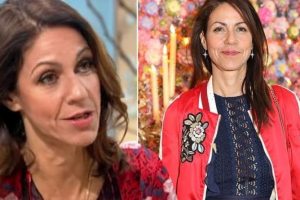 Countryfile star Julia Bradbury, 51, said “there is no preparing you for those words” after revealing her breast cancer diagnosis this evening. The 51-year-old will have her left breast along with a six centimetre tumour removed next month.

Surgeons will also take tissue from her lymph nodes to determine whether the disease has spread or not.

She said: “The cruel thing about human beings is that we are the only creatures on the planet who know we are going to die.

“We all live in hope of a peaceful end in our beds, having had children and grandchildren, or having fulfilled whatever mission in life we choose.

“But the word cancer is so ugly it makes you think of the most unimaginably horrible death. That’s the reality of it.”

The outdoors lover added she hoped she caught her cancer early enough to treat it.

Julia also noted that while a mastectomy is “shattering”, it meant being there for her children.

The presenter has three kids; Zephyr, 10 and twins Xanthe and Zena, both six.

The Countryfile star went on to say she is focusing on surgery to fight the disease and carrying on with life.

“I still need to be a mum to my kids, a partner and a working woman,” she said. “I’m still Julia.”

She added to Mail Online: “My plan is to come through it and out the other side and I hope to be able to do that bravely enough so that women who are scared to get tested, to get a diagnosis, go ahead.

Julia had initially found a lump in her breast, which turned out to be a cluster of benign micro-cysts, last year.

In July, she underwent an ultra sound and a physical examination, however nothing alarming was raised.

Due to this, she admitted she almost didn’t go to her appointment this month, but was encouraged to by her sister Gina.

“Suddenly I was lying down on my side with my back braced against a pillow having a machine like a hole punch taking lumps out of my breast,” she recalled after her consultant found a “tiny dark pinprick”.

She went on to say: “I felt I was fit and healthy, I hoped my body was standing up to life.”

Julia added that realising one in eight women get breast cancer and that “the danger zone is between 50 and 75” continously went through her head as she waited for the result.

“You can’t help thinking that, it’s only human.”

The mother-of-three said she wept after learning Girls Aloud star Sarah Harding had died from the disease earlier this month.

The singer was just 39 when she lost her fight to cancer after it spread to other parts of her body.

55,000 women are diagnosed with breast cancer each year in the UK.

If you are concerned about a lump or thickened tissue, visit your doctor for advice.