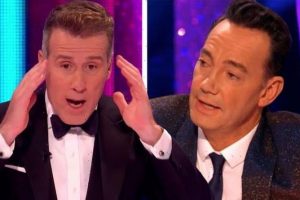 Anton Du Beke, 55, has long been a pillar of Strictly Come Dancing, but this year he made his long-awaited debut on the judging panel, something he’d wanted to do for years. Welcoming him to the other side of the ballroom show, Craig Revel Horwood, 56, gushed over his new co-judge, who stepped in while Bruno Tonioli tended to other work committments.

He’s more lenient than me

In a new joint interview, Craig, who has a reputation for being Mr Nasty, admitted that Anton has a different way of scoring to him.

“Anton’s a great addition, he knows the process of working with celebrities inside-out, he’s been there,” he said.

“Particularly with celebs that haven’t been ‘gifted’, he’s had to manoeuvre them around that dance floor – and he’s been with great dancers, where he could show off his talents!

“Armed with all that information, he’s showing great empathy for the celebs – he’s more lenient than me.

Craig revealed the pair love to play “Good Cop, Bad Cop” on the panel, as they book-end Shirley Ballas and Motsi Mabuse on their new individual Covid-safe pods.

During their interview, Anton admitted he likes to think he’s been a fair judge.

“I like to think I’ve not been too soft,” he told Best Magazine.

“But I’ve been nicer than Craig, which isn’t difficult!

‘Though, as anyone who knows him will tell you, he’s wonderful – a lamb in wolf ’s clothing.”

It comes after all four Strictly judges have found themselves at the centre of “fix” claims from viewers, who accused them of using their scores to try and keep certain contestants in the show.

One celebrity in particular who came under fire was BBC Breakfast star Dan Walker, who made it through to the 11th week of the show.

Many watchers claimed that it was a “disgrace” he was making it through whereas “better dancers” were being voted off.

Strictly were then forced to respond, after new research appeared to reveal over 40 percent of the show’s previous winners had been BBC employees.

The broadcasting house rubbished the claims, insisting no favouritism goes on behind the scenes.

A spokesperson said: “These statistics are misleading.

“The winner of Strictly is decided by the public vote.”

Craig had previously opened up to The Mirror about how it’s “impossible” for the show to be a fix.

The long-time star of the programme explained: “It’s sort of impossible [to fix the show] and I can tell you why. We have to vote personally on a keypad, and we have to push that keypad within seven seconds of the dance finishing and we can’t change our minds.

“Once we’ve chosen a mark, that is it and we don’t know what the other judges are choosing until it’s too late.

“Not until we get our paddles ready to vote do I know what everyone has voted, because I have given fours when other people have given nines!”

He admitted he’s as “shocked” as his fellow judges because “it’s their own personal opinion and no one can change it.

The full Craig Revel Horwood and Anton Du Beke interview can be read in the latest bumper issue of Best magazine, on sale now.