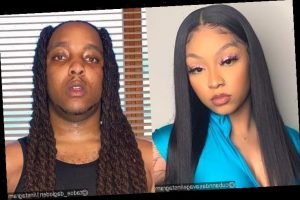 In an Instagram Live, the Cuban rapper tearfully addresses the leaked X-rated footage and blames it on a woman named Ari, who is apparently her ex-boyfriend’s former girlfriend.

AceShowbiz –Cuban Doll is furious after a sex tape featuring her and her ex-boyfriend Tadoe leaked online. Taking to Instagram Live to address it, she was visibly emotional as she blamed the leak on a woman named Ari, who appears to be Tadoe’s ex-girlfriend.

“…call me every f**kin’ day and tellin’ me what they seeing on the Internet. And that b***h Ari, okay, you so happy you got a video of me and Tadoe f**kin’ from last year on my birthday when I was drunk,” she said during the Live session.

Cuban claimed Ari had been having her sex tape for some time and had been threatening to leak it. “The b***h has been holding the video over my head for about six months like, ‘Imma post the video, Imma post the video,’ ” she shared. “Okay, go ahead! I’ve been tellin’ the b***h to post it. I don’t give a f**k.”

Cuban later expressed her apology to her family in Instagram Story posts. “To my family I’m sorry,” she wrote. “Yeah I’m mad becus I have nieces and nephews that look up to me. Only reason why I was crying like my poor baby got to see that yuno..? Other then that I don’t care, let’s mfn play all dayyyyy.”

She repeated her accusation toward Ari, adding, “And that Tadoe my n***a ain’t no random a** n***a got me on camera that’s so old & I was drunk as hell. But a b***h took that video out his phone and been saving it for the longest… holding it over my head I been knew it was gone come out me & my team was well prepared for this…”

Some Internet users assumed that the Ari whom Cuban referred to as was Ari Fletcher, but that doesn’t appear to be the case. Tadoe was dating a girl named Ari last year and she was involved in a beef with Cuban in December 2019.