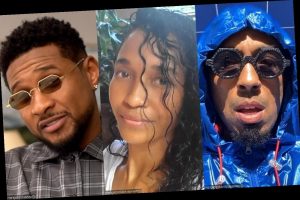 ‘I’m thinking this is the worst year because she goes and started dating Usher and I’m going mad,’ the music producer says in a new interview with Angela Yee for Fox Soul.

AceShowbiz –Dallas Austin used to date TLC member Rozanda Thomas a.k.a. Chilli back in the day and even shared a son together. In a new interview with Angela Yee for Fox Soul’s “Established with Angela Yee”, the producer revealed that he was beyond mad when he found out that Chilli jumped into a relationship with his own friend Usher after their breakup.

“I wanted to kill everybody,” he recalled. ” ‘Cause, honestly, I was friends with Usher, too. It was just one of those things where…we two different people. We always have been, in that sense.”

He continued, “I feel like when–actually, it was crazy because when I moved to Miami and I just had to get out of Atlanta, too crazy. So, I moved to Miami, I set up in a house, me and her first broke up then and I started working on music in Miami in this house.” Dallas revealed that he tried to get back together with her, sharing, “By the time I called and said, ‘Hey, you know what, let’s be together in Miami,’ she said, ‘Nah, nah, it’s a wrap. I’m done.’ “

“I’m thinking this is the worst year because she goes and started dating Usher and I’m going mad. We got a kid. That’s my girl,” Dallas divulged. The producer then revealed he channeled his feelings to songs. “So, I went through this whole year thinking it was the worst year of my life when really, I did all the Pink songs at that time. ‘Just Like a Pill’ and ‘Don’t Let Me Get Me’ was about the relationship I was in,” he shared.

Another song that was born at the time also included Blu Cantrell‘s ‘Hit Em Up Style” and he also used his time to focus on movie “Drumline”. “All of this stuff was going on but I must have had blinders on because I was in such a space that everybody gets to when you break up,” Dallas added.

He wanted to stop himself from hearing stuff about Usher and Chilli’s relationship but it was something that he couldn’t avoid. “People are calling you and telling you they’re in a video,” he recalled. “I didn’t realize I had taken all of that energy and I put it in these records and making ‘Drumline’. When that year was over, I was in Atlanta, premiering ‘Drumline’ with all my kids with me and I thought, ‘Damn, why did I think this was the worst year? This was the best year I ever had.’ “