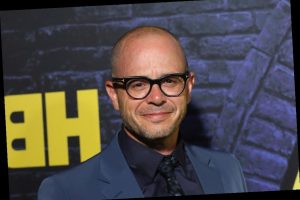 Alan Moore and Dave Gibbons’ superhero origins social commentary DC graphic novel series Watchmen has historically been a challenge for Hollywood to adapt due to its sprawling and complex plotting.

In fact when HBO and Warner Bros approached The Leftovers and Lost co-creator Damon Lindelof to reboot it, he turned them down twice — until he found a way into reviving the story about superheroes who’ve been disrespected by a right-wing leaning society.

Rather than retread the same area that Zack Snyder did in his 2009 feature adaptation, Lindelof sought to pay homage to the old, while expanding the Watchmen universe, particularly in what the IP could say about what America is experiencing today.

And Watchmen, despite having aired last fall on HBO, continues to echo loudly in its tale of Sister Knight (Oscar winner Regina King) and her grandfather Hooded Justice (the first masked hero) taking on a white supremacist group, especially during Black Lives Matter and the recent controversy over President Donald Trump holding a political rally in Tulsa, OK, the site of the 1921 race massacre.

Watchmen begins shockingly with a reenactment of the Tulsa riot, which is part of the series narrative. Lindelof came to learn about the Tulsa race massacre by reading author Ta-Nehisi Coates’ The Atlantic article “A Case for Reparations”.

“It’s one of the most important pieces of writing in the last couple of decades,” Lindelof tells Deadline’s Crew Call.

He continues, “I was was so floored by what had happened, but even more floored, that it had been hidden, camouflaged. My obsession with the Tulsa race massacre of 1921 ran into the freight train that was HBO and Warner Bros.’ (saying to me) ‘are you sure you don’t want to do Watchmen?’. Suddenly those two things collided. To set the story in Oklahoma was born out of my compulsions to talk about the Massacre of ’21 as an origin story because in addition to not knowing about it, it felt like a superhero origin story. Because superhero origin stories are about the deconstructions of a world whether that’s Krypton, or the death of Bruce Wayne’s parents, or Uncle Ben in Spider-Man, or the loss of Black Panther‘s father in Wakanda. Tulsa 1921 felt like it was mythic, even though it was real history. Only Watchmen can combine a real world events with a fictional genre piece.”

Watchmen recently received a Peabody Award, the organization lauding the HBO series as a “revolutionary” that “provides new answers to classic comic book genre questions about what it means to mask one’s identity and who gets to be a superhero. More than that, it offers a frank, provocative reflection on contemporary racialized violence, the role of police, and how Americans understand their place in the world after a large-scale disaster.”

Listen to our conversation with Lindelof below: