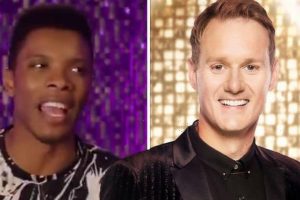 Dan Walker is one of the many stars heading to the Strictly dance floor tonight for the series launch. Ahead of airing, his co-star Rhys Stephenson admitted the BBC Breakfast presenter was like the “head boy” of the show in a chat with Express.co.uk and other media outlets.

Speaking about the celebrity contestant WhatsApp group, CBBC presenter Rhys opened up about the dynamics so far.

Dan had been labelled the “dad” of the chat by some of the stars while Sara Davies had been called the “mum”.

However, Rhys admitted the pair were actually more like “head boy” and “head girl”.

Rhys confided: “First of all, I feel it’s not mum and dad.

“I feel like Dan and Sarah are the head boy and head girl of the WhatsApp group.

“Sarah’s there taking notes, she’s doing the minutes and Dan’s always the one to say what’s going on.”

Rhys went on to chat about what he thought his role in the group is as well.

“I’m like the mouthy one who drifts in between all the cliques.”

Elsewhere, Dan recently opened up about an injury he had suffered amidst his training.

The star told his followers earlier this week how he had “done something completely stupid”.

The BBC Breakfast presenter had run straight into a closed glass door, ending up with a nasty head injury.

He shared a look at what had happened with his social media followers as he recalled the incident.

“I left my wallet in the taxi as I checked into a hotel.

“I ran back out to chase the driver and ran straight into a giant glass door which I thought was open.”

The broadcaster then explained how the diners in the restaurant had reacted when he fell.

“Full deck on the floor, gasps in the restaurant… lump on the head,” he continued. “Thankfully… I still remember the routine.

“I got the wallet back as the driver had stopped for a fag around the corner.”

Strictly launches tonight on BBC One at 7.45pm.