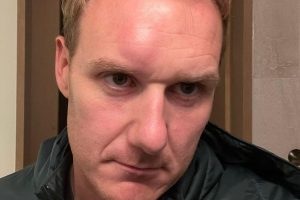 Dan Walker has shared a video of the moment he ran into a glass door before he began Strictly Come Dancing rehearsals earlier this year.

The BBC Breakfast presenter, 44, who recently took a swipe at Piers Morgan following his exit from the BBC competition, posted the CCTV footage to his social media accounts.

The video shows him running through a hotel foyer head-first into a revolving glass door.

“I’ve got some amazing memories from #Strictly but I’ll never forget that it nearly ended before it even began!” he wrote.

“This was the incident which led to a brain scan back in September! Staff at the hotel and A&E were great & I was OK to return to training after a 3 day break.

“I’d left my wallet in the taxi but completely ignored the massive glass panel in the way while I was running outside before the car drove off.”

He continued: “There was an immediate cartoon bump and blood where my teeth burst my lips but thankfully it wasn’t as serious as it looked.

“I had the scan and was told to rest. @nadiyabychkova was lovely & came with me to A&E but had to hide in the car park for hours because we hadn’t been announced on the launch show at this point.

The collision with the hotel’s glass door meant Dan couldn’t begin training with then-secret Strictly partner, Nadiya Bychkova, 32, for three days before being given the all-clear.

“Love that you got the footage and shared!” wrote former Strictly professional and contestant on next year’s Dancing on Ice, Brendan Cole.

But the BBC’s Caroline De Moraes asked perhaps the most important question: “Bless you-but biggest question is: did u get your wallet back?”

The former Football Focus host went on to become a firm favourite in this year’s series of the BBC stalwart reality show, getting to the quarter-finals.

He was eventually knocked out of the competition after landing in the bottom two with presenter AJ Odudu, who later had to withdraw from this year’s grand final due to a torn ligament.

Dan himself expressed his upset at the Blackborn-born star missing the final with partner, Kai Widdrington, posting a photo he'd taken of her with her mum, Florence, following the announcement.

He wrote: “It was lovely to spend some time with @ajodudu and her lovely mum – Flo – last night.

“AJ is obviously gutted to miss the final but her mum is so proud of the daughter who has grown into the most beautiful dancer.

“Sometimes in life… you just need a hug from your mum [heart eyes emoji].”

Eastenders actress Rose Ayling-Ellis and her partner Giovanni Pernicewon the show's grand final last weekend, becoming the first deaf contestant to do so.

The final was the most diverse yet, with Rose up against only the show's second same-sex couple: chef John Whaite and his partner, Johannes Radebe.

For the latest on all your favourite celebrities, sign up for OK!'s daily newsletter here.