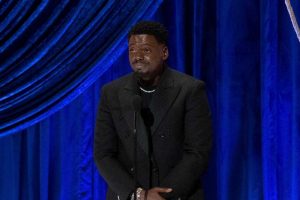 When Daniel Kaluuya gave his speech after winning the Oscar for Best Supporting Actor for his role as Fred Hampton in Judas and the Black Messiah, he hit all the right beats. He gave a loving tribute to Hampton. Showed love to his costar (and competition in the category), LaKeith Stanfield. And—as all good boys should do—Kaluuya thanked his mom.

Lol at Daniel Kaluuya’s mom reacting to him shouting his parents for having sex during Oscars speech 😂😂😂 pic.twitter.com/E3jdwlcBoz

And Daniel later reinforced the awkwardness of this moment in the press room by saying, “I think that’s pretty obvious that all our parents had sex,” LOL. Let’s salute the Kaluuya family for giving us heartwarmingly awkward moment—and hell, while we’re at it, a reminder to thank our parents for bringing us into this earth.

Funny moment aside, we need to take a moment to appreciate the rest of Daniel’s speech. He spoke about Fred Hampton, a legendary social activist who was chairman of the Illinois chapter of the Black Panther Party. Hampton was murdered by the FBI at only 21 years old. Daniel reminded us of Hampton’s legacy—and how the man taught him to love himself.

“[Fred Hampton] was on this earth for 21 years, and he found a way to feed kids breakfast, educate kids, give free medical care, against all the odds,” Kaluuya said. “He showed me how to love myself…thank you so much for showing me myself.”

You love analyzing every detail from every awards show. So do we. Let’s do it together.