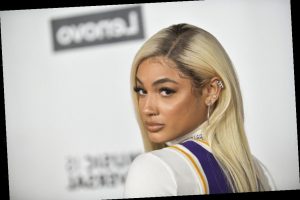 With her presumed breakup with rapper DaBaby now in the rearview mirror, DaniLeigh is now taking to social media, where she is denying Lil Durk romance rumors.

DaBaby and DaniLeigh dated for a while

DaBaby and DaniLeigh were first connected musically. DaniLeigh was the co-choreographer for DaBaby’s music video for “Bop.” Then, DaBaby was featured on DaniLeigh’s single, “Levi High.” Despite neither one of them going public about a relationship, MeMe, mother of DaBaby’s daughter, spoke about the two being together on social media. MeMe and DaniLeigh got in several arguments on social media, but for the most part, DaniLeigh still never directly confirmed that she was with the rapper.

In interview with Power 105.1 earlier this year, she spoke about the rumors, saying, “I mean it is what it is. I know it comes with this life. I already know you post something, people just gon’ catch on I guess, so. I don’t know, it is what it is. I don’t really care.”

She made two posts on Twitter that had people talking. First, she tweeted, “I never had hate til I dated u.” Then she retweeted a tweet from producer 40 that stated, “You’re not selfish for wanting the same energy and love you give. Remember that.”

The Shade Room reposted the tweets and then she addressed it, commenting, “Y’all gotta try to have more love this early in the day… but at the end of the day I’m human… that man was 100% single ‘to me’ when we started… I’m done talking about it tho I promise. Ready to get this money and drop this album. Good morning everyone and have a blessed day today.”

After posting a video to her Instagram in which she was teaching Lil Durk some dance moves, people started to believe that DaniLeigh and Lil Durk were dating.

However, Lil Durk has a girlfriend, India Royale, who he has been dating for several years.

DaniLeigh took to Instagram to clarify the rumors and state that she and Lil Durk are not dating. In a comment that was captured by The Shade Room, she wrote, “Y’all do me a favor and chill tf out !! Ain’t no boundaries crossed / or anything like that at all happened, he mad respectful and shows off his relationship every sec he has so stop with the bs tryna start s**t.”

RELATED: Lil Baby Says That People Wanted Him to Have Beef With DaBaby

In the comments on The Shade Room, Lil Durk also had something to say about the matter, commenting, “Y’all know damn well the internet can’t get in between us 😏 try again #durkXindia.”

Fans also seemed to agree with them. One said, “He in love with India people need to stop trying to create drama 🙄.”

However, some also gave caution to DaniLeigh. “
I don’t trust her she quick to miss up a happy home,” said someone, referencing her prior relationship with DaBaby.

Someone else added, “Awww I remember when she said that about Dababy.”