Home » Celebrities » Dave Chappelle Was at Grammys 2020, Despite Not Accepting Award On Stage 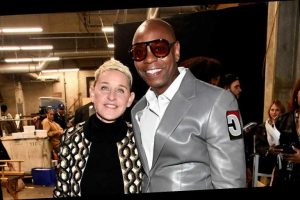 Dave Chappelle was actually at the 2020 Grammy Awards, even though he didn’t go up on stage to accept his award!

The 46-year-old comedian won the award for Best Comedy Album, but he was no where to be seen during the event on Sunday night (January 26) at the Staples Center in Los Angeles.

The award was accepted on Dave‘s behalf by presenters Tanya Tucker and Brandi Carlile.

Dave was spotted meeting up with Ellen backstage at the event. See the photos here!

END_OF_DOCUMENT_TOKEN_TO_BE_REPLACED

END_OF_DOCUMENT_TOKEN_TO_BE_REPLACED
We and our partners use cookies on this site to improve our service, perform analytics, personalize advertising, measure advertising performance, and remember website preferences.Ok