David Archuleta Lets Loose in ‘Faith in Me’ Music Video 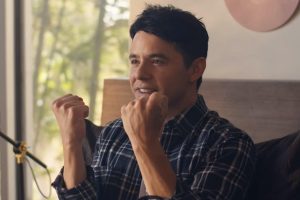 The clip opens with the 31-year-old receiving a text from his crush and he starts dancing in his bedroom and continues showing off his moves on the street and even in his neighbor’s backyard.

AceShowbiz –David Archuleta brings a lot of energy to the “Faith in Me” music video. The newly-released visuals shows the former “American Idol” runner-up letting loose and dancing throughout the neighborhood.

The clip opens with the 31-year-old receiving a text from his crush. Elated by the message, he starts dancing in his bedroom and continues showing off his moves on the street and even in his neighbor’s backyard.

“Who cares what anyone else will say?/ No rules, no stops and only us/ We don’t have to stay here/ We don’t really have to take it slow,” the musician sings as he embraces his queerness on the track. “Baby, you can put your faith in me.”

The end of the clip, however, proves that David is just hallucinating. As he’s back on his bed, the crooner responds to his crush’s text with a simple, “Hi.”

David came out as gay back in June 2021. In a lengthy Instagram post, he revealed, “I like to keep to myself but also thought this was important to share because I know so many other people from religious upbringings feel the same way… I’ve been open to myself and my close family for some years now that I am not sure about my own sexuality.”

David, who is a member of The Church of Jesus Christ of Latter-day Saints, explained he came out to his family in 2014, went through a period of thinking he was bisexual, and admitted he doesn’t have “too much sexual desires and urges as most people,” adding that works for him since he’s saving himself for marriage.

“I just invite you to please consider making room to be more understanding and compassionate to those who are LGBTQIA+, and those who are a part of that community and trying to find that balance with their faith which also is a huge part of their identity like myself,” he added.