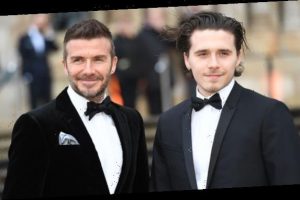 David Beckham, just like his wife Victoria, was blissfully happy about their son Brooklyn getting engaged to now fiancee Nicola Peltz.

Serving proud papa realness! David Beckham, 45, poured his heart out in a super sweet Instagram message about his son Brooklyn‘s engagement to Nicola Peltz on Sunday, July 12. “Congratulations to these two beautiful people,” he captioned with a heart emoji next to a sweet photo of the betrothed couple. “As they begin this exciting journey together we are so so happy for you guys.” Nicola, 25, was touched by his words and left not one, not two but four of her own heart emojis in the comments section.

Brooklyn’s mom Victoria, 46, was equally thrilled. “The MOST exciting news!!,” she shared on her own Instagram. “We could not be happier that @brooklynbeckham and @nicolaannepeltz are getting married! Wishing you so much love and a lifetime of happiness. We all love you both so much x.”

The 20-year-old dropped jaws when he kicked off the weekend on Saturday, July 11, by announcing that he and The Last Airbender star got engaged nearly a year after they were first spotted out together. He broke the good news with a romantic photo of himself caressing Nicola, whose emerald-cut diamond ring was prominent on her ring finger.

“Two weeks ago I asked my soulmate to marry me and she said yes xx I am the luckiest man in the world,” Brooklyn announced in the caption. He also teased about becoming a father in the future, writing, “I promise to be the best husband and the best daddy one day [heart emoji] I love you baby xx.”

Rumors started to swirl about Brooklyn & Nicola when they were seen leaving The Nice Guy restaurant in Los Angeles in October 2019. They were also spotted heading out of Leonardo DiCaprio‘s Halloween party one day earlier. The couple has posted a ton of romantic photos with one another in the months since on their journey to getting engaged.